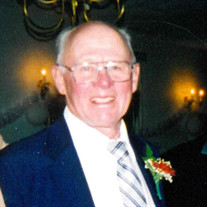 Winslow B. “Wes” Weston, age 89, of Bloomsburg passed away peacefully at home, on Friday, April 24, 2020, surrounded by his loving family and loyal canine, Abby. Wes was born in Boston, MA on Nov. 3, 1930. He was the son of the late Mary (McNamara) Weston and Winslow B. Weston Sr. Winslow was raised in Stoughton MA and graduated from Stoughton High School in 1948. He also attended classes at Massasoit Community College with a focus in fire science. Wes served as an electrician in the U.S. Navy from 1948 1952. Wes was a dedicated member of the Stoughton Fire Department Local 1512 for 30 years until his retirement in 1988. He was a member of the International Association of Firefighters and the Massachusetts Association of Retired State, County and Municipal Employees. Winslow was a town meeting member and served as a commissioner on the Stoughton Housing Authority from 1976 1988. After retiring to Bloomsburg PA in 1989, he enjoyed farming and raising animals on his “Gentleman’s Acres”. Wes served on the Columbia County Housing Authority for several years. He was a life member of the Bloomsburg VFW and the Catawissa American Legion. Wes had the privilege to be a member of the Honor Guard of the Bloomsburg area, a time he cherished. Wes is survived by his devoted wife, Eva (Horne) Weston, with whom he would have celebrated 65 years of marriage in October. He is survived by four children, George Weston and wife Sue, Cindy Rhone and husband Brian, all of Bloomsburg, daughter, Memie Christie and husband Arthur of Benton PA and son Patrick of North Attleboro, MA. He will be fondly remembered by the McNamara family and many friends of Stoughton, as well as his six grandchildren and nine great grandchildren. In addition to his son, William, he was preceded in death by stepsisters, Barbara Graham of Marshfield, MA and Phyllis Tupper of Manchester, CT. A time of visitation for family and friends will be held on Thursday, July 23, 2020 from 5:00 pm - 6:00 pm at the Allen Funeral Home, Inc., 745 Market at Eighth Streets, Bloomsburg. Funeral services will begin at 6:00 pm with Rev. Michael Delp, officiating. The Allen Funeral Home, Inc., Bloomsburg is honored to be serving the Weston family. Memorial contributions in Winslow's name are suggested to: Stoughton Fire Department for the Firefighter’s Relief Fund, 30 Freeman St. Stoughton MA 02072 or Commonwealth Hospice, 1409 North Market St. Suite 202 Berwick PA 18603.

The family of Winslow B. "Wes" Weston created this Life Tributes page to make it easy to share your memories.

Winslow B. “Wes” Weston, age 89, of Bloomsburg passed away peacefully...

Send flowers to the Weston family.