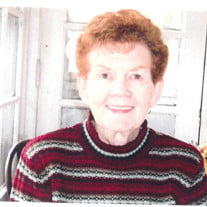 Winifred T. "Winnie" Casey, age 94, of Bloomsburg, passed away on Friday morning, January 10, 2020, at Geisinger Medical Center in Danville. Winnie was a resident of her home in Scott Twp. since 2001, and formerly lived on Market St., Bloomsburg for many years. She was born on Sunday, August 30, 1925 in Danville, a daughter of the late Thomas J. and Lena C. (Schott) McDermott. Throughout her younger years, Winnie attended the Danville area schools, and later graduated from St. Cyril's Academy in 1943. On August 20, 1959, Winnie married her loving husband, Francis T. Casey, who preceded her in death on January 19, 1992. She was employed by Kennedy Van Saun, Danville for 17 years, Sunshine Laundry, Bloomsburg, and over 16 years at The Area Agency on Aging, Bloomsburg, retiring in 2005. Winnie was a member of St. Columba Catholic Church and The Blessed Mother Society. Winnie was a Food Bank Volunteer, she was an accomplished artist and gardener, with a special gift with roses. In addition to her husband and parents, Winnie was also preceded in death by six brothers; Thomas, Jack, William, Robert, Paul, and James McDermott. Survivors include her two daughters; Kathleen wife of Jeffrey Stone and Patricia Bower, all of Bloomsburg, as well as many nieces, nephews and friends. A time of visitation for family and friends will be held on Wednesday, January 15, 2020 from 9:00 am to 10:00 am at St. Columba Catholic Church, 342 Iron Street, Bloomsburg, a rosary in Winnie's memory will be started at 8:30 am. A Mass of Christian Burial will begin on Wednesday, January 15, 2020 at 10:00 am at St. Columba Catholic Church with Monsignor Robert E. Lawrence, celebrant. Graveside committal services will be held on Thursday, January 16, 2020 at 1:00 pm in St. Joseph Catholic Cemetery, Danville. The Allen Funeral Home, Inc., 745 Market at Eighth Streets, Bloomsburg is honored to be serving the Casey family. Memorial contributions in Winifred's name are suggested to: St. Columba Memorial Fund, 342 Iron Street, Bloomsburg, PA 17815.

Winifred T. "Winnie" Casey, age 94, of Bloomsburg, passed away on Friday morning, January 10, 2020, at Geisinger Medical Center in Danville. Winnie was a resident of her home in Scott Twp. since 2001, and formerly lived on Market St., Bloomsburg... View Obituary & Service Information

The family of Winifred T. "Winnie" Casey created this Life Tributes page to make it easy to share your memories.

Send flowers to the Casey family.