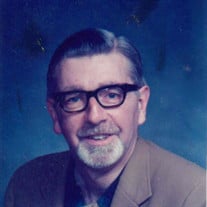 William C. Zehringer, Ph.D. age 81, of Bloomsburg, passed away on Friday, November 23, 2018, and is dearly missed. He was born on April 21, 1937 in Atlantic City, NJ, son of the late William E. and Marie R. (Clark) Zehringer, and spent his early life there. Bill graduated from LaSalle University, Philadelphia, in 1959, then served six years in the US Army Reserve. He spent his early career as a social worker and teacher, and in 1974 began teaching composition at Bloomsburg University. He was trained as a Medievalist, earning a PhD in Middle English Language and Literature from Temple University in 1981, and for the remainder of his life was an energetic scholar and prolific author. In his later years he enjoyed substitute teaching in the Bloomsburg Middle and High Schools. Bill was a member of the Society of Catholic Social Scientists and was recently recognized by the American Civil Liberties Union as a citizen journalist. He was a person of resonant faith, a Third Order Franciscan who lived his beliefs through action. He had many passions and was deeply engaged in the community. Bill loved to sing and was a trained vocalist. He sang baritone with the Saint Columba Church Adult and Resurrection Choirs, and was a charter member of the Bloomsburg Bi Centennial Choir. He also enthusiastically lent his voice to the Pennsylvania Alpiners and Bloomsburg Barber Shoppers. He was a founder and past president of the Medieval Hikers, where his memory continues to inspire its members to look up, look ahead and follow the path. Bill especially loved books and reading. In addition to curating his extensive personal library, he served as president of the Friends of Bloomsburg Public Library and established the St. Columba Church Library, where he also served as Head Librarian. Bill leaves behind his wife Joan M. Zehringer of Bloomsburg, stepsons Stephen and Michael Albert, stepdaughters Catherine and Mary Albert, and grandchildren Alex and Noah Erlwein and Benjamin and Ellen Sproule, along with many cherished friends. A time of Visitation for family and friends will be held on Monday, November 26, 2018 from 5:00 pm to 7:00 pm at the Allen Funeral Home, Inc., 745 Market at Eighth Streets, Bloomsburg. A Mass of Christian Burial will be celebrated on Tuesday, November 27, 2018 at 10:00 am at St. Columba Catholic Church, 342 Iron St., Bloomsburg with Monsignor Robert E. Lawrence, officiating. Graveside committal services will immediately follow in the New Rosemont Cemetery, Espy. The Allen Funeral Home, Inc., is honored to be serving the Zehringer family. Memorial contributions in William's name are suggested to: Southern Poverty Law Center 400 Washington Avenue Montgomery AL 36104. For friends and family wishing to send a memorial gift, share a personal memory or offer condolences to the family, a Memorial Tribute Page in William’s honor and a Sympathy Store are available at www.Allen FuneralHome.com.

The family of William C. Zehringer Ph.D. created this Life Tributes page to make it easy to share your memories.

Send flowers to the Zehringer family.