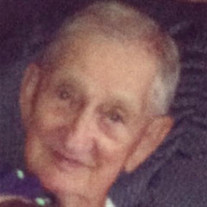 William R. Ulshaffer, age 90, of Bloomsburg, passed away on Friday, March 16, 2018, at his Montour Twp residence. William was a resident of his home in Bloomsburg since 1955. William was born on Sunday, October 16, 1927 in Bloomsburg, a son of the late Charles W. and Evelyn (Stackhouse) Ulshafer. Throughout his younger years, he attended the Bloomsburg area schools, and later graduated from the Bloomsburg High School in 1944. William expanded his education by attending Pennsylvania College of Technology, Williamsport. William faithfully served his country by serving in the U.S. Navy during WW II and the Korean Conflict. He was a self employed Machinist, and partner with Jay Ulshafer at The Bloomsburg General Machine Shop until his retirement. William was a member of the St. Paul Episcopal Church, also a life member of the Montour Twp. Fire Company and was a past Treasurer of Winona Fire Company for many years. William enjoyed spending his time playing golf, he had two hole in ones during his playing time at Rolling Pines. In addition to his parents, William was also preceded in death by his loving wife the former Nancy K. (Krainak) Ulshaffer on February 6, 2005. Survivors include his son, Charles A. Ulshaffer of Bloomsburg; two granddaughters, Kelly C. Ulshaffer and fiance Peter Heuermann of Bloomsburg; Aimee L. Neiswender of Orlando, FL; great grandchildren, Chase M. Crawford, Jude M. Heuermann and Evan C. Heuermann. A time of Visitation for family and friends will be held on Thursday, March 22, 2018 from 1:00 pm to 2:00 pm at the Allen Funeral Home, Inc., 745 Market at Eighth Streets Bloomsburg. Funeral Services will begin on Thursday, March 22, 2018 at 2:00 pm at the Allen Funeral Home, Inc. with his pastor Rev. Howell Sasser, officiating. Graveside committal services will immediately follow in the New Rosemont Cemetery, Bloomsburg with military honors being presented by a combined V.F.W. and American Legion groups. The Allen Funeral Home, Inc., is honored to be serving the Ulshaffer family. Memorial contributions in William's name are suggested to: Columbia Montour Hospice 410 Glenn Ave., Suite 200 Bloomsburg, PA 17815. Friends and family wishing to send a memorial gift, share a personal memory or offer condolences to the family, a Memorial Tribute Page in William’s honor and a Sympathy Store are available at www.Allen FuneralHome.com.

William R. Ulshaffer, age 90, of Bloomsburg, passed away on Friday, March 16, 2018, at his Montour Twp residence. William was a resident of his home in Bloomsburg since 1955. William was born on Sunday, October 16, 1927 in Bloomsburg, a son... View Obituary & Service Information

The family of William R. Ulshaffer created this Life Tributes page to make it easy to share your memories.

William R. Ulshaffer, age 90, of Bloomsburg, passed away on Friday,...

Send flowers to the Ulshaffer family.