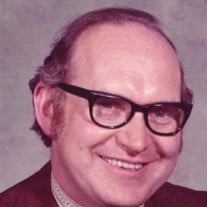 William R. Sorber, age 87, of Bloomsburg, died on Thursday, June 8, 2017, a resident of the Geisinger Bloomsburg Health Care Center where he had resided two years. William was a resident of his current home in Bloomsburg for over 6 years. William was born on Wednesday, April 23, 1930 in Bloomsburg, a son of the late John and Laura (Kemler) Sorber . Throughout his younger years, he attended the Bloomsburg area schools, and later graduated from the Bloomsburg High School in 1949. Following graduation he faithfully served his country in the US Army. He was honorably discharged in 1953. On June 5, 1954, William married his loving wife, Laura Jean Halderman of Bloomsburg. For over 40 years, William was employed by J. S. Raub Shoe Store as a Salesman until his retirement in 1991. He was a member of and former Fire Chief of Americus Hose Co., Sunbury. He was also a member of the former Bloomsburg Moose Lodge 623 and Valley of Bloomsburg American Legion Post 273 . In addition to his parents, William was also preceded by siblings: Betty Dugan, Geraldine Haladay, Bertha Erlston, Elmer Sorber, John Sorber, Clarence "Ted" Sorber, and James Sorber. He was the last surviving member of his immediate family. Survivors include his beloved wife of 63 years, Laura Jean Sorber;children: Karen Sue O'Brick (Kevin) of Penns Creek and Robert W. Sorber of Liverpool; and grandchildren: Tiffany Waters (Deke), Julia Sorber, Jordyn Sorber. A time of Visitation for family and friends will be held on Sunday, June 11, from 2 to 3 pm at the Allen Funeral Home, Inc. 745 Market at Eighth St., Bloomsburg . Funeral Services will immediately follow at 3 p.m. with Rev. George Zerb. pastor of Dutch Hill Bible Church, officiating. Graveside services will be held on Monday at 11 am in the Creveling Cemetery. The Allen Funeral Home, Inc., is honored to be serving the Sorber family. Friends and family wishing to send a memorial gift, share a personal memory or offer condolences to the family, a Memorial Tribute Page in William’s honor and a Sympathy Store are available at www.Allen FuneralHome.com.

The family of William R. Sorber created this Life Tributes page to make it easy to share your memories.

Send flowers to the Sorber family.