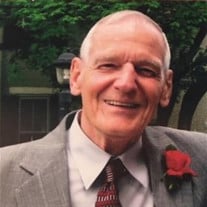 Dr. William L. Jones, Ph.D., age 89, of Bloomsburg, passed away Friday, August 23, 2019, surrounded by his loving family at Emmanuel Center for Nursing and Rehabilitation in Danville. He was born on Saturday, April 26, 1930 in Wymore, Nebraska, a son of the late John D. and Leta (Fisher) Jones. William graduated from the Wymore High School, Wymore, NE in 1947. William expanded his education by attending and wrestling for the University of Nebraska, Lincoln, NE and graduated in 1961 with a Doctorate Degree in Education Psychology. He faithfully served his country in the U.S. Army during the Korean War, Commanding an artillery brigade and was honorably discharged from active duty in 1954. He served with the Army Reserve retiring in March, 1965 with the rank of Captain. On December 30, 1949, William married his loving wife, the former Joan Maine who preceded him in death on July 4, 2019. For over 25 years, William was employed by Bloomsburg University as a Professor in Special Education, until his retirement in 1989. While at Bloomsburg University he advised the fraternity Beta Sigma Delta, he was Department Chair of Special Education, co advised Special Olympics for Columbia Montour County, he was the recipient of the Temple Grandin Award, and helped develop Gallup's Teacher Perceiver Screening. William was a Consultant Psychologist for Geisinger Medical Center for over 25 years. William was a member of the Good Shepherd United Methodist, Bloomsburg, for over 50 years. William loved serving parents and special needs students, he was co founder with his wife Joan, of The Jones Center for Special Education Excellence. He also helped found CampEmerge at Camp Victory, Millville over 20 years ago. William was Past President of the Bloomsburg Area School Board. In retirement he was a volunteer advocate for special needs students/parents. For over 30 years he delivered Meals on Wheels. He was a very patient and loving father and a "Dad" to many. In addition to his parents and wife, William was also preceded in death by a daughter, Trudi Jones, a son, Rodney Jones, two brothers, Alfred Jones, and Elwin Jones, and a sister, Eloise Ottersberg. Survivors include his beloved children; Mark Jones and wife Sheila of Bloomsburg, Julie wife of Patrick Woll of Danville, Timothy Jones and wife Lisa of Ellicott City, MD, Jonathan Jones and wife Kathy of Bloomsburg, Jeff George and wife Denise of Perry Sound, Canada and Eric Jones of Bloomsburg, 15 grandchildren, and 16 great grandchildren. A time of Visitation for family and friends will be held on Saturday, September 7, 2019 from 10:00 am to 11:00 am at the Good Shepherd United Methodist Church, 101 East Fifth St., Bloomsburg. Funeral Services will begin on Saturday, September 7, 2019 at 11:00 am at the Good Shepherd United Methodist Church with Rev. Audrey M. Brosious, officiating. Private committal services will be held in the New Rosemont Cemetery, Espy. Military honors will be provided by a combined American Legion and V.F.W. contingent. The Allen Funeral Home, Inc., 745 Market at Eighth Streets, Bloomsburg is honored to be serving the Jones family. Memorial contributions in William's name are suggested to: CampEmerge c/o Camp Victory, PO Box 810 Millville, PA 17846. Friends and family wishing to send a memorial gift, share a personal memory or offer condolences to the family, a Memorial Tribute Page in William’s honor and a Sympathy Store are available at www.Allen FuneralHome.com.

Dr. William L. Jones, Ph.D., age 89, of Bloomsburg, passed away Friday, August 23, 2019, surrounded by his loving family at Emmanuel Center for Nursing and Rehabilitation in Danville. He was born on Saturday, April 26, 1930 in Wymore, Nebraska,... View Obituary & Service Information

The family of Dr. William L. Jones Ph.D. created this Life Tributes page to make it easy to share your memories.

Send flowers to the Jones family.