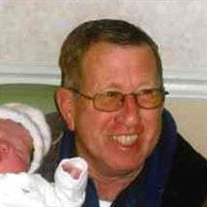 William M. “Bill” Flick, age 66, of Bloomsburg, died on Saturday, May 28, 2016, surrounded by his loving family and under the care of Columbia Montour Home Hospice at Maria Hall. William was a resident of his home in Bloomsburg for nearly 40 years. William was born on Wednesday, Sept. 21, 1949, in Danville, a son of the late Henry N. and Mary I. (Pegg) Flick. Throughout his younger years, William attended the Bloomsburg area schools, and later graduated from the Bloomsburg High School in 1968. William expanded his education by attending Williamsport Community College, and graduated with an Associate Degree in 1970. For 30 years, William was employed by Bloomsburg University as an electrician until his retirement on April 1, 2016. William was a faithful member of the St. Columba Catholic Church. He was also a member of Bloomsburg Moose Lodge #623 LOOM, Bloomsburg Sons of American Legion, Bloomsburg Fair Association, and Bloomsburg Elks Lodge #436 BPOE, William enjoyed spending his time with his family, especially at the beach. He was a Penn State football fan. He was known as a hard worker and enjoyed restoring Farmall Tractors with his family. Survivors include a son, Nathan Flick, and wife, Rachel, of Bloomsburg; a daughter, Lisa Steinruck, and husband, Jared, of Orangeville; six grandchildren; and six siblings: Robert Flick and wife, Diane, Barbara Christy and husband, James, Nancy Hock and husband, Dana, Jay Flick and wife, Jean, David Flick and wife, Cindy, Kay Hess and husband, Terry, all of Bloomsburg. A time of Visitation for family and friends will be held on Thursday, June 2, 2016, from 5 to 7 p.m. at the Allen Funeral Home, Inc., 745 Market St., Bloomsburg. The Loyal Order of Moose will conduct memorial services at 7 p.m. Mass of Christian Burial will begin on Friday, June 3, 2016, at 11 a.m. at the St. Columba Catholic Church, Third and Iron streets, Bloomsburg, with Monsignor Robert E. Lawrence as celebrant. Graveside committal services will immediately follow in the New Rosemont Cemetery. The Allen Funeral Home, Inc., is honored to be serving the Flick family. Memorial contributions in William’s name are suggested to: Columbia Montour Home Hospice at Maria Hall, 410 Glenn Ave., Suite 200, Bloomsburg, PA 17815. Friends and family wishing to send a memorial gift, share a personal memory or offer condolences to the family, a Memorial Tribute Page in William’s honor and a Sympathy Store are available at www.Allen‑FuneralHome.com.

William M. &#8220;Bill&#8221; Flick, age 66, of Bloomsburg, died on Saturday, May 28, 2016, surrounded by his loving family and under the care of Columbia Montour Home Hospice at Maria Hall. William was a resident of his home in Bloomsburg... View Obituary & Service Information

The family of William M. "Bill" Flick created this Life Tributes page to make it easy to share your memories.

Send flowers to the Flick family.