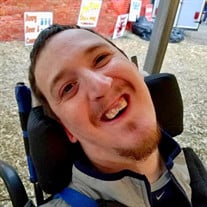 William Patrick Herrity aka “Billy”, age 41, of Bloomsburg PA, loving son, brother, uncle, and friend was unexpectedly called to the kingdom of heaven on March 29, 2021. He was born in Loma Linda, CA on May 14, 1979 with the gift of compassion and an infectious smile he shared freely to parents William J. Herrity and Patricia (Koslosky) Herrity. With a positive attitude and perseverance, despite his physical challenges and the adversity he faced, he graduated from Bloomsburg High School in June of 2000. He enjoyed the simple things in life and loved making people laugh. He was a devout Penn State Football fan. Watching the games was one of his favorite past times and if seen out and about shopping, going for a walk uptown, or enjoying the fair he would be decked out head to toe in PSU attire, so everyone knew that was his team. He spent many years riding horses and going to dances at Eos Therapeutic horseback riding. He loved holidays and celebrations spending time with his family and going to church at Saint Columba where he would sing as loud as he could with words only God could understand. His sense of humor was undeniable he loved teasing and flirting with his nurses because he knew he could get away with it and playing practical jokes on people just to make them laugh. He is survived by his parents; Patricia Herrity of Bloomsburg and William J. and wife Constance Herrity of Reno, NV, two sisters and their families: Kelly (Herrity) Petros and husband Barry, and their four children; Anthony, Matthew, Zachary, and Ava, Deborah Herrity and partner Nicholas Halbert, and their three children; Gabrielle, Alexander, and Saralyn as well as aunts, uncle and cousins. He was preceded in death by his paternal grandparents, William and Jacqueline Herrity of Mahanoy City, maternal grandparents, Peter and Margaret Koslosky of Port Carbon, and uncle, Robert Koslosky of Bloomsburg. A time of visitation for family and friends will be held on Monday, April 26, 2021 from 10:00 am to 11:00 am at St. Columba Catholic Church, 342 Iron St., Bloomsburg. A Mass of Christian Burial will be celebrated at 11:00 am with Rev. Monsignor Robert E. Lawrence, officiating. The Allen Funeral Home, Inc., 745 Market at Eighth streets, Bloomsburg is honored to be serving the Herrity family. Memorial contributions in William's name are suggested to: Eos Therapeutic Horseback Riding either by check mailed to 288 Dahl Road, Bloomsburg, PA 17815 or on their website: www.eostrc.com.

The family of William "Billy" Patrick Herrity created this Life Tributes page to make it easy to share your memories.

Send flowers to the Herrity family.