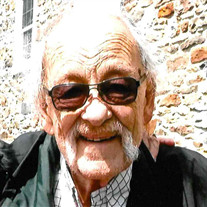 William "Bill" George Miller, age 75, of Bloomsburg, passed away on Tuesday, May 8, 2018, at his residence. He was a resident of his home in Bloomsburg for over 32 years. Bill was born on Sunday, January 10, 1943 in Reading, a son of the late George Miller and Grace (Bortz) Krick. Bill graduated from the Cocalico High School, Denver, PA in 1960 and then honorably served his country for the next four years in the United States Air Force. Bill expanded his education by attending RETS Electronics School, Philadelphia and soon went to work for Picker X Ray (now Philips). On January 29, 1966, Bill married his loving wife, Marilyn R. (Rupp) Miller. He formerly lived in Reading and enjoyed going out and about town with Marilyn in one of their many Corvettes. He loved dancing, being social and his work. The year of their 10th wedding anniversary, Bill became a dad and Tara entered the Miller's lives. Bill was probably the best dad ever, even when he gave Tara a piece of licorice and a turkey leg at 6 months old. He thought that was Best Dad Ever material and thought Marilyn's disdain of these events was quite comical. Bill had great pride in being a dad and a husband and would do anything for his family. He also loved the outdoors and had several hobbies, he loved woodworking and making things for around the house, including Tara's first crib. He was an avid member of the 12th Street Rod and Gun Club and went to hunting camp every year since 1960. Although it had been about 30 years since he had caught a deer, he still thoroughly enjoyed playing poker and having a sip of Windsor at camp. Bill also loved all sorts of electronics (with the exception of smart phones). He was always tinkering with gadgets and loved computers. He had a Commodore 64 before most people did in the 1980's. He loved playing all types of solitaire on the computer and prided himself in completing 150 expert level puzzles every month. He could fix just about anything, from plumbing issues to wiring a hot tub, both of which he completed in the weeks before his passing. Bill's work and passion was working on X Ray machines. He could install, fix, repair and service any piece of Bio Med Engineering equipment that you could think up, from a plain old X Ray to a complicated MRI machine. He was brilliant in the STEM field and never got too frustrated helping his daughter with her math homework during her school days. Bill was amazing and he was recognized for his work ethic via an award from his long time employer Lehigh Valley Hospital. Bill never shied away from a steak dinner or a treat from Rita's. He was also a fantastic human to his cat, Siggy and to his grand cats Chulee and Simon. He loved to make up names for things, Tara and Marilyn will fondly always be remembered by Bill's nicknames for them. He was an extraordinary human being, with a kind, quiet way and a dry, witty sense of humor. Everyone who crossed his path recognized him as a down to earth guy who would go out of his way to help his fellow man. He will be extremely missed by all who had the honor of knowing him. Survivors include his beloved wife of 52 years, Marilyn R. Miller and his much loved daughter, Tara N. Miller both of Bloomsburg, a half brother, Dennis Krick and wife Linda of Ephrata; aunt, Mildred Bortz of Hellertown. He is also survived by his cousins and nieces. A time of Visitation for family and friends will be held on Tuesday May 15, 2018, from 12:00 noon to 1:00 pm at the Allen Funeral Home, 745 Market at Eighth Streets, Bloomsburg. A Celebration of Bill's life will be held on Tuesday at 1:00 pm with Rev. Steven C. Hummel, pastor of Trinity Reformed United Church of Christ, officiating. Military services will be presented by a combined American Legion and V.F.W. honor groups. The Allen Funeral Home, Inc., is honored to be serving the Miller family. Memorial contributions in Bill's name are suggested to: GoFundMe page at www.gofundme.com/william-miller-memorial-scholarship set up by his daughter which will provide a scholarship to a deserving student who plans to go into the STEM field from the Bloomsburg High School. Any funds raised over the goal of the scholarship will help the family defray the final expenses. Friends and family wishing to send a memorial gift, share a personal memory or offer condolences to the family, a Memorial Tribute Page in Bill's honor and a Sympathy Store are available at www.Allen FuneralHome.com.

William "Bill" George Miller, age 75, of Bloomsburg, passed away on Tuesday, May 8, 2018, at his residence. He was a resident of his home in Bloomsburg for over 32 years. Bill was born on Sunday, January 10, 1943 in Reading, a son of... View Obituary & Service Information

The family of William "Bill" George Miller created this Life Tributes page to make it easy to share your memories.

Send flowers to the Miller family.