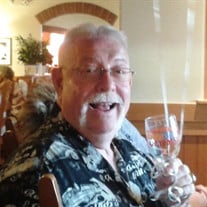 Warren Thomas Smith, Jr., age 66, of McClure, died on Tuesday, September 4, 2018, a patient of the Geisinger Medical Center in Danville. Warren was a resident of his home in McClure for over 4 years and previously resided in Philadelphia for 30 years. He was born on Thursday, July 17, 1952 in Bridgeton, NJ, a son of the late Warren T. and Margaret (Hewitt) Smith. On April 22, 1977, Warren married his loving wife the former Joan Marie (Schreiber) who preceded him in death on March 29, 2011. Warren faithfully served with the U.S. Marine Corps during the Vietnam War as a paratrooper and was honorably discharged in 1972. For over 44 years, Warren was employed as a Truck Driver and was last working for Ryder Logistics, Lewistown, until his retirement on June 4, 2018. He was a life member of the OIDA Trucking Club. He enjoyed spending his time bowling, riding his Harley Davidson motorcycle, camping with family and spending time with his grandchildren. In addition to his wife and parents, Warren was also preceded by a brother, Arthur Smith and two sisters, Linda Murphy and Florence Hawkins. Survivors include his fiancee Deborah L. Miller at home; four children, Shannon M. Gonzalez of Reading; Jennifer G. wife of Wade Shultz of Bloomsburg; Kristin N. wife of Michael Dorazio of Catawissa; and Shawn T. Smith and wife Sheena of Philadelphia; five grandchildren, Noah Smith, Shawn Smith, Jr., Peyton Smith, Jade Shultz, Dakota Shultz, two great grandchildren, two stepsons; Sean R. Miller and wife Ashley of Dalmatia and Kurt M. Miller of Halifax and a sister, Shirlee Ann Mitchell of Landisville, NJ. A time of Visitation for family and friends will be held on Friday, September 7, 2018 from 11:00 am to 12:00 pm at the Allen Funeral Home, Inc., 745 Market at Eighth Streets, Bloomsburg. Funeral Services will begin on Friday, September 7, 2018 at 12:00 pm at the Allen Funeral Home, Inc. in with Rev. Greg Moore, chaplain of American Legion Post #273, officiating. A combined group of V.F.W and American Legion will provided military honors. The Allen Funeral Home, Inc., is honored to be serving the Smith family. Memorial contributions in Warren's name are suggested to: American Cancer Society c/o Columbia County Unit 1948 East 3rd. St. Williamsport, PA 17701. Friends and family wishing to send a memorial gift, share a personal memory or offer condolences to the family, a Memorial Tribute Page in Warren’s honor and a Sympathy Store are available at www.Allen FuneralHome.com.

Warren Thomas Smith, Jr., age 66, of McClure, died on Tuesday, September 4, 2018, a patient of the Geisinger Medical Center in Danville. Warren was a resident of his home in McClure for over 4 years and previously resided in Philadelphia for... View Obituary & Service Information

The family of Warren Thomas Smith Jr. created this Life Tributes page to make it easy to share your memories.