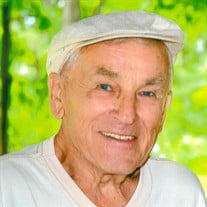 Walter P. Vitkauskas , age 86, of Bloomsburg, died on Monday, February 13, 2017, a patient of The Gardens at Millville. Walter was a resident of his home in Catawissa Township for over 40 years. Walter was born on Friday, September 19, 1930 in Waterbury, CT, a son of the late Charles and Valeria (Dvaleskis) Vitkauskas. Walter graduated from the Leavenworth High School, Waterbury CT, in 1949. Walter was a Commercial Truck Driver for his entire working life. He was last employed by McLean Trucking. He was a member of the Teamsters Union and was awarded recognition for driving over one million miles with out an accident. Walter enjoyed spending his time playing horse shoes, working on his many Volkswagen diesel automobiles, and spending time with family and his dogs. Walter was known for spontaneous road trips with his dog as his companion. In addition to his parents, Walter was also preceded by his wife Marian (Bolton) Vitkauskas on October 9, 2015, a daughter: Clare Poulin and siblings: Anthony Pecukonis, Joseph Pecukonis, Virginia McKenna, Florence Petreezi and Bronis Vitkauskas. Survivors include his children: Sir Richard A. Vitkauskas of Olmstedville NY, Diane (Christopher Campbell) of Daytona Beach, FL, Marian Decerbo of Naugatuck, CT, Christine M. (Walter Deitrick III) of Bloomsburg, and David J. (Catherine) Vitkauskas of Bloomsburg, 16 grandchildren, and 19 great grandchildren. Private services will be held at the convenience of the family. The Allen Funeral Home, Inc., is honored to be serving the Vitkauskas family. Memorial contributions in Walter's name are suggested to the Activity Department of The Gardens at Millville, 40 Haven Lane, Millville, PA 17846.

Walter P. Vitkauskas , age 86, of Bloomsburg, died on Monday, February 13, 2017, a patient of The Gardens at Millville. Walter was a resident of his home in Catawissa Township for over 40 years. Walter was born on Friday, September 19, 1930... View Obituary & Service Information

The family of Walter P. Vitkauskas created this Life Tributes page to make it easy to share your memories.

Send flowers to the Vitkauskas family.