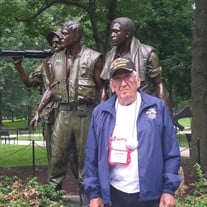 W. George Whitfield Jr., age 89, was promoted on to Glory from Holmes Regional Medical Center in Merritt Island, Florida, on Saturday, Jan 30, 2021. Born in a home on Second St. in Espy, April 6, 1931 to the late Wellington George, Sr. and Clara L. (Dent) Whitfield, George went on to graduate in 1949 from Scott School in Espy, PA. George proudly served in the United States Army and Army Reserve for 40 years, from 1951 to 1991. He actively served tours of duty in Korea and Vietnam. His meritorious service in Vietnam earned him a Bronze Star. In June of 2018, he and his son Wade shared the privilege of traveling to Washington D. C. with the Space Coast Honor Flight, an organization which takes World War II, Korean War, and Vietnam Veterans to visit their War Memorials in the capital city. In his early years, George worked at Girton Manufacturing in Millville. Upon his return from Vietnam, he began employment with the US Post Office in Bloomsburg where he worked the customer service window until his retirement in 1992. He married the former Ruth (Stiner) Lynch in 1974 and together, until her death in 1994, they sang in the Shiloh Bible Church choir, hosted family gatherings, played cards with friends (which revealed an unexpected competitive side) and finally purchased a camper for summer living at Hidden Valley Camping Resort, Mifflinburg and a winter home in Merritt Island, Florida. George would occasionally play the alpine horn, taught himself to play the organ, and was skilled at playing the trombone which he played in church, also with the Hi Hats, the Colonial Band of Berwick and the Catawissa Military Band. He loved to bowl, golf, show off his fruit trees, browse around flea markets, but most of all he loved welcoming family and guests to his home in Florida and introducing them to his beloved Orsino Baptist Church family. In addition to his parents and wife, Ruth, he was preceded in death by step daughter, Deborah (Lynch) Young and step-grandson, David Lynch. He is survived by three children: daughter, Cindy Litterer and her husband John of Bloomsburg; son, Wade Whitfield and his wife, Denise of Bloomsburg; daughter, Cathy Dressel and her husband Jeffrey of Mifflinville along with two step-children Richard Lynch and his wife, Karen of Scranton and Randy Lynch of Bloomsburg, and step-son-in-law, Daniel Young of Bloomsburg. Survivors also include five grandchildren: Stephanie O'Brien of Bloomsburg, Marybeth Martinson of Radford, VA, Amy Whitfield of Orangeville, Rebecca Connor of Nescopeck, and Kellee Capozzelli of Mifflinville; four step-grandchildren; Melinda Rhoads, of Bloomsburg, Eric Lynch of Douglasville, PA, Mitchell Young of Leesburg, VA, and Dr. Christopher Young of Rockford, IL; three great-grandchildren, nine step-great-grandchildren, as well as his brother, the Reverend Dan Whitfield and wife Yvonne of Carbondale, IL, three nieces and one nephew. Private services will be held at the convenience of the family at Shiloh Bible Church, Bloomsburg with Rev. Dr. Douglas H. Lyon, officiating. Graveside committal services will immediately follow in the Creveling Cemetery, Bloomsburg with military honors. A public Celebration Of Life service will be announced at a future time. The Allen Funeral Home, Inc., 745 Market at Eighth Streets, Bloomsburg is honored to be serving the Whitfield family. Memorial contributions in George's name are suggested to: Space Coast Honor Flight, PO Box 560975, Rockledge, FL 32956 or Orsino Baptist Church, 4505 North Courtenay Parkway, Merritt Island, FL 32953.

The family of W. George Whitfield Jr. created this Life Tributes page to make it easy to share your memories.

Send flowers to the Whitfield family.