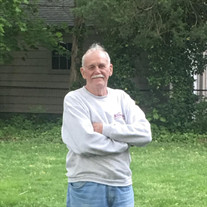 W. Ray Crawford, age 89, a life long resident of Bloomsburg, died on Saturday evening, April 25, 2020, surrounded by his family at the home of his son in Haddon Heights, New Jersey. He grew up on the family farm in Mt. Pleasant Township and often told stories of participating in escapades with his older brothers and friends from neighboring farms. Ray’s mother died when he was just weeks old. His grandmother Florence Crawford took on the challenge of bringing order to a house full of boys. He met his wife, Barbara, during their school years and was married at Canby Lutheran Church in 1951. Ray enjoyed hands on work and that often resulted in outdoor work. He began at Magee Carpet Company at night while continuing to help is brother with the family farm during the day. He drove for Bloomsburg Asphalt Plant for several years and did a stint of crane operation on the Penn State campus in St. College during construction of the Hammond Engineering Building. He did long distance hauling for Hidlay Oil Company and then worked for PP&L in the maintenance and repair of their steam generators, retiring in the ‘95. After retiring at the age of 65 he opened his own excavating business and continued to do projects for private home owners until recently. His wife, Barbara, strongly influenced their move “to town” in the early years of their marriage where they lived until 2006. They then returned to Mt. Pleasant Township and lived at 2228 Crawford Road as Ray had accumulated much equipment for his excavating business. The family enjoyed hearing many childhood stories as we drove around those country roads with him. Ray was skilled at building and fixing, usually with a cold Michelob, only from a bottle, nearby. He enjoyed the companionship of his two small dogs, especially after Barbara’s passing. Barbara frequently brought home a stray dog or cat much to his dismay. And often the pet would end up choosing Ray as the favorite human in the house! In addition to his parents Wilbur E. and Kathryn E. (Morrison) Crawford, Ray was also preceded by his beloved wife of 64 years, Barbara A. (Roberts) Crawford on November 3, 2015 and also by two brothers: Amos E. Crawford and Joe E. Crawford. Survivors include his daughter: Debbi C. Goeltsch and husband, Robert, of Mechanicsburg; his son, Jeffrey R. Crawford and wife, Lisa, of Haddon Heights, NJ: six grandchildren: Melissa Miller and husband, Kevin, Matthew Crawford and wife, Janess, Michael Crawford, Stephen Crawford, and Maria Crawford; five great grandchildren and one anticipated arrival: Jonathan Miller, Abby Miller, Brady Crawford and Kinley Crawford; his half sister: Joan Dean of Harrisburg, and two nephews, Dale Crawford and Nate Robert both of Bloomsburg; and two nieces: Cathy Howard of Chesapeake, VA and Haley Roberts of Bloomsburg. Due to the recent events and current CDC guidelines, Funeral services will be held privately for the family with graveside services to be held in the Canby Lutheran Church Cemetery, Mt. Pleasant Township. Ray's family graciously apologizes for restricting his family and friends from paying respects at this time. A celebration of Ray's life will be held at a later time. The Allen Funeral Home, Inc. 745 Market at Eighth Street in Bloomsburg is honored to be serving the Crawford, Goeltsch and Roberts families. His family is grateful that he was able to spend his last weeks at his son’s home surrounded and cared for by family, a blessing during this time of COVID pandemic. We look forward to a future time when we can gather with each other and his friends to celebrate his life and share stories. Ray received multiple units of blood during his last weeks. We ask that you remember him by making a donation of blood if you are able and if not a donation to the American Red Cross.

W. Ray Crawford, age 89, a life long resident of Bloomsburg, died on Saturday evening, April 25, 2020, surrounded by his family at the home of his son in Haddon Heights, New Jersey. He grew up on the family farm in Mt. Pleasant Township... View Obituary & Service Information

The family of W. Ray Crawford created this Life Tributes page to make it easy to share your memories.