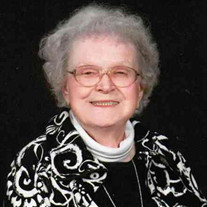 Veronica D. (Dancho) McCloskey, age 96, of Danville, died on Saturday, July 16, 2016, a patient of the Geisinger Medical Center in Danville. Veronica was born on Wednesday, January 7, 1920 in Wilburton, Pennsylvania, a daughter of the late Michael and Mary (Horvath) Dancho. Throughout her younger years, Veronica attended the Numidia area schools. On August 15, 1942, Veronica married her loving husband, William A. McCloskey, formerly of Bloomsburg, sharing 47 years of marriage. For over 50 years, Veronica was employed by Milco Industries as a seamstress until her retirement in 1985. Veronica was a faithful member of the St. Columba Catholic Parish, and also a member of the Casey Club. In addition to her parents, Veronica was also preceded in death by her beloved husband, William A. McCloskey; a son, William A. McCloskey, II; three sisters: Mary Owens, Anna Cashmere and Ella Welkom; and three brothers: George Dancho, Michael Dancho and John Dancho. Survivors include a son, Michael L. McCloskey and wife, Rene, of Bloomsburg; a daughter, Marianne DiPippa and husband, Louis, of Berwick; a son, Daniel A. McCloskey and wife, Sandi, of Venice, FL; a son, Timothy J. McCloskey and wife, Lisa Jo, of Williamsport; daughter in law, Timi McCloskey of Pocatello, ID; eight grandchildren, fourteen great grandchildren, two great-great- grandchildren and numerous nephews and nieces. A time of Visitation for family and friends will be held on Tuesday evening, July 19 from 6 to 8 p.m. at the Allen Funeral Home, Inc. 745 Market at Eighth Street in Bloomsburg. A Wake service will be held on Tuesday evening at 6 p.m. at the funeral home. A Mass of Christian Burial will begin on Wednesday morning at 10 a.m. from the St. Columba Catholic Church, Third and Iron Streets in Bloomsburg with Monsignor Robert E. Lawrence, celebrant. Graveside committal services will immediately follow in the All Saints Cemetery, Elysburg. The Allen Funeral Home, Inc., is honored to be serving the McCloskey family. "May her soul and all the souls of the faithful departed rest in peace."

Veronica D. (Dancho) McCloskey, age 96, of Danville, died on Saturday, July 16, 2016, a patient of the Geisinger Medical Center in Danville. Veronica was born on Wednesday, January 7, 1920 in Wilburton, Pennsylvania, a daughter of the late... View Obituary & Service Information

The family of Veronica D. (Dancho) McCloskey created this Life Tributes page to make it easy to share your memories.

Send flowers to the McCloskey family.