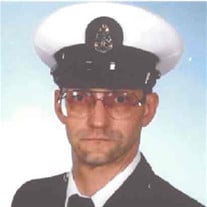 Thomas Yorty, age 62, of New Oxford, PA died on Monday, August 21, 2017, at his residence. Thomas was born on Thursday, August 4, 1955 in Bloomsburg, a son of Leonard E. Yorty, Sr. of Bloomsburg and the late Suzanne (Vanderslice) Romeo. Throughout his younger years, Thomas attended and later graduated from the Bloomsburg High School in 1973. He enlisted in the U.S. Navy and served for 27 years, becoming a highly decorated veteran and earning three bachelor of science degrees and one masters degree. In addition to his mother, Thomas was also preceded by his grandparents, Elmer and Alice (Dyer) Yorty and Heister and Doris (Dietrich) Vanderslice. Surviving in addition to his father are 4 sons, Jason Yorty and wife, Karen, of Chesterfield, VA, Michael Yorty and wife, Natalie, of Schiller Park, IL, Aaron Yorty of San Diego, CA and John Yorty of Chesapeake, VA, five grandchildren, his twin brother, Timothy Yorty and wife, Christine, of Eaton Rapids, MI, and a brother, Leonard E. Yorty, Jr. and wife, Deborah, of New Oxford, PA. A time of Visitation for family and friends will be held on Friday, September 1, 2017 from 12:00 noon to 1:00 pm at the Allen Funeral Home, Inc. 745 Market at Eighth Streets, Bloomsburg. Funeral Services will begin at 1:00 pm with services conducted by family members. The Allen Funeral Home, Inc., is honored to be serving the Yorty family. Memorial contributions in Thomas' name are suggested to a charity of the donor's choice. Friends and family wishing to send a memorial gift, share a personal memory or offer condolences to the family, a Memorial Tribute Page in Thomas’ honor and a Sympathy Store are available at www.Allen FuneralHome.com.

The family of Thomas Yorty created this Life Tributes page to make it easy to share your memories.

Send flowers to the Yorty family.