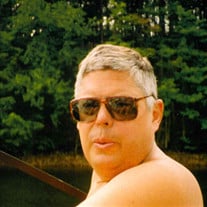 There is joy and celebration as Thomas Harland Wheadon, age 73, passed into Heaven on May 8, 2017. He has won his ten year long battle with Alzheimer's disease. Tom was born on Saturday, June 19, 1943 in Shelby, Ohio, son of the late Charles Harland and Ruth (Root) Wheadon. Throughout his younger years, Tom attended Northfield Mount Hermon in Gill, MA. Tom expanded his education by attending Lehigh University, and graduated with a degree in Industrial Engineering in 1965. On August 21, 1965, Tom married his loving wife, the former Christine Katerman of Bloomsburg. After graduation, Tom worked for Sears in Allentown, PA. Following Tom and Christine's return to Bloomsburg he worked at TRW, Danville in the Industrial Engineering department for 19 years. His final employment began in 1984 as Director of Manufacturing at Magee Carpet Co. until his retirement on May 1, 1997. Tom and Chirstine moved from their farm outside of Bloomsburg, PA to their camp in Adirondacks at Stillwater Reservoir that same year. They moved to Danville, Pa in June 2013 and Tom was admitted to Nazareth Memory Center. Two years later he was transferred to Emmanuel Center, Danville Tom was a member of the Wesley United Methodist Church, Bloomsburg. Tom enjoyed spending his time with family and friends. He loved cars, was an avid road racing fan, enjoyed gardening and outdoor work activities. Spending time in the Adirondack Mountains boating, hiking, and swimming were some of his favorite past times. Tom is dearly loved by many, especially his beloved wife of 52 years: Christine (Katerman) Wheadon of Danville; two children: Wendy (Wheadon) Champoux of Catawissa, PA and Jeffrey Harland Wheadon (Nichole) of Bloomsburg; grandchildren: Luc Champoux, Megan Champoux, Samuel Wheadon, Joshua Wheadon, Matthew Wheadon, and Krue Wheadon and two siblings: David Wheadon of Woodstock, VT, and Margaret Wheadon of Glenfield, NY. In addition to his parents, Tom was preceded in death by a brother, Stephen Wheadon. A memorial service will be held in June at a time to be announced. The Allen Funeral Home, Inc., is honored to be serving the Wheadon family. Memorial contributions in Tom's name are suggested to a charity of the donor's choice. Friends and family wishing to send a memorial gift, share a personal memory or offer condolences to the family, a Memorial Tribute Page in Tom's honor and a Sympathy Store are available at www.Allen FuneralHome.com.

There is joy and celebration as Thomas Harland Wheadon, age 73, passed into Heaven on May 8, 2017. He has won his ten year long battle with Alzheimer's disease. Tom was born on Saturday, June 19, 1943 in Shelby, Ohio, son of the late... View Obituary & Service Information

The family of Thomas Harland Wheadon created this Life Tributes page to make it easy to share your memories.

There is joy and celebration as Thomas Harland Wheadon, age 73,...

Send flowers to the Wheadon family.