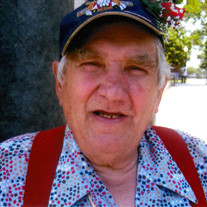 Thomas F. Molter , age 90, of Danville, passed away on Wednesday, January 31, 2018, at his Riverside residence. Thomas was a resident of his home in Riverside for over 45 years. Thomas was born on Thursday, July 28, 1927 in Northumberland, a son of the late Ludwig F. and Ana Elizabeth (Van Horn) Molter. Throughout his younger years, Thomas attended the Danville area schools, and later graduated from the Danville High School in 1945. Thomas served four years in the U.S. Navy during WWII enlisting in 1945 and was honorably discharged in 1949. He graduated from the former Dunwoody Institute, Minneapolis, MN for bakery. On July 20, 1965, Thomas married his loving wife, the former Nancy A. Walter. Thomas was employed as a Baker for many years in Minnesota. He was also employed by various contracting companies as a Concrete Finisher until his retirement. He was a member of the Columbia Montour Boy Scout Counsel and active with Troop #33, Riverside. Thomas enjoyed spending his time hunting, fishing, wood carving, going to pow wows and he was mechanically inclined. He loved spending time with his family and telling stories to his grandchildren. In addition to his parents, Thomas was also preceded by his stepmother, Nellie Molter; two daughters, Holly Molter and Penny Molter; a brother, Philip Molter and a sister, Annamarie Hulsizer. Survivors include his beloved wife of 53 years, Nancy A. Molter; 8 children, Wendy wife of John Watson of Blanco, TX; Ted Wilcox and wife Sandra of Pearcy, AR; Randy Wilcox and wife Christy of Interlaken, NY; Donald W. Molter and wife Judy of Palmyra, PA; Thomas M. Molter and wife Aimee of Spotsylvania Court House, VA; Kimberly A. Molter wife of Andrew Woll of Bloomsburg; Joseph S. Molter, Sr. and wife Amy of Catawissa; Amy J. wife of Clair Andrews, Jr. of Riverside; 20 grandchildren; 12 great grandchildren; brother, Ted Molter and wife Susan of Niceville, FL; sister, Emma Gearhart of Lewisburg; brother, John Molter and wife Betty of Danville; and a brother in law, John Hulsizer of Muncy. A time of Visitation for family and friends will be held on Tuesday, February 6, 2018 from 12:00 pm to 2:00 pm at the Allen Funeral Home, Inc., 745 Market at Eighth Streets, Bloomsburg. Funeral Services will begin on Tuesday, February 6, 2018 at 2:00 pm at the Allen Funeral Home, Inc. with his nephew, Rev. Gregory Molter, officiating. Graveside committal services will at the convenience of the family in the Hendrickson Zion United Methodist Cemetery, Danville. Military honors will be provided by a combined VFW and American Legion groups. The Allen Funeral Home, Inc., is honored to be serving the Molter family. Memorial contributions in Thomas's name are suggested to: Columbia Montour Boy Scouts of America, 5 Audobon Court, Bloomsburg, PA 17815. Friends and family wishing to send a memorial gift, share a personal memory or offer condolences to the family, a Memorial Tribute Page in Thomas’s honor and a Sympathy Store are available at www.Allen FuneralHome.com.

Thomas F. Molter , age 90, of Danville, passed away on Wednesday, January 31, 2018, at his Riverside residence. Thomas was a resident of his home in Riverside for over 45 years. Thomas was born on Thursday, July 28, 1927 in Northumberland,... View Obituary & Service Information

The family of Thomas F. Molter created this Life Tributes page to make it easy to share your memories.

Send flowers to the Molter family.