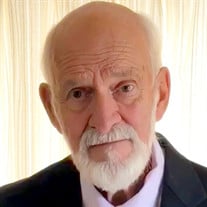 Thomas J. Kaler, age 81, of Millville, passed away on Wednesday morning, August 18, 2021, at his home with family and under the care of Commonwealth Hospice. Tom and his late wife returned to their home in Millville in 2012. Tom was born on Sunday, September 24, 1939 in Williamsport, PA, a son of the late Donald E. and Verona E. (Fluman) Kaler. Throughout his younger years, Tom attended the Millville area schools, and later graduated from the Millville High School with the class of 1957. Tom expanded his education by attending Lycoming County Community College in Williamsport and graduated with a Bachelor's Degree in Business. On August 16, 1958, Tom married his loving wife, Carol L. Artman, formerly of Millville. For over 30 years, Tom was employed by Sprout Waldron as an salesperson until his retirement in 1997. Tom was a member of the Mill-Green United Methodist Church. Tom loved spending time and adventures in the outdoors with his family. One of the highlights of his life was hiking the Grand Canyon with is 82 year old father and three brothers. Nothing was more appealing to Tom than sitting down and spending time in a good book or two, just one of his many talents. Tom loved his family most of all, sharing every moment possible with them, and their fond memories of him will always remain. In addition to his parents, Tom was also preceded in death by his beloved wife, Carol L. Kaler on June 6, 2014 and by a brother, Ronald Kaler. Survivors include his loving fiance', LouAnn Tarlecky of Millville; his daughter: Tracy J. McVicker and husband, William, of Germantown, NY; his son, Matthew J. Kaler and wife, Noelle, of Owings Mills, MD; his daughter, Jennifer A. Kelly and husband, Brad, of Chincoteague Island, VA, a grandson, Will McVicker and wife, Amanda, a granddaughter, Tara Lynn McVicker, a granddaughter, Heather Westlund and husband, Nelsson; a grandson, Zachary McVicker, a granddaughter, Abigail McVicker, a granddaughter, Logan Kaler, a granddaughter, Morgan Kaler, a granddaughter, Samantha Kelly, a grandson, Jack Thomas Kelly, a great grandson, Liam McVicker and a great grandson, Aiden McVicker; two brothers: Richard Kaler and wife, Paula, of Rome, IN, and Ralph Kaler of Roswell, NM; and two sisters: Linda Kline and companion, Dick Fry, of Montoursville, and Lynette Hock and husband, Dale, of Millville. A time of visitation for family and friends will be held on Sunday evening, August 22, 2021 from 5 to 7 p.m. at the Allen Funeral Home, Inc. 107 W. Main at Railroad Streets in Millville. Graveside Services will begin on Monday morning, August 23, 2021 at 10 a.m. in the Millville Cemetery with Rev. Robert E. Strozyk, officiating. The Allen Funeral Home, Inc., is honored to be serving the Kaler family. Memorial contributions in Tom's name are suggested to: Mill-Green United Methodist Church, P.O. Box 470, 75 S. State St., Millville, PA 17846.

Thomas J. Kaler, age 81, of Millville, passed away on Wednesday morning, August 18, 2021, at his home with family and under the care of Commonwealth Hospice. Tom and his late wife returned to their home in Millville in 2012. Tom was... View Obituary & Service Information

The family of Thomas J. Kaler created this Life Tributes page to make it easy to share your memories.

Thomas J. Kaler, age 81, of Millville, passed away on Wednesday...

Send flowers to the Kaler family.