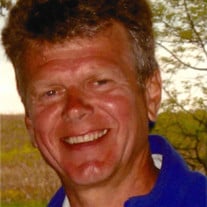 At home with family and feeling the love of countless others, Thomas R. "TR" Johnson , age 64, of Bloomsburg, died on Monday, August 22, 2016. He confronted the monster that is ALS with the same tenacity and perseverance with which he lived his life. Since 2013, he along with his family and friends accommodated each step of this difficult journey living life while facing the inevitable outcome. Thomas was born on Thursday, May 1, 1952 in Bloomsburg, son of Thomas C. and Frances J. (Laubach) Johnson of Bloomsburg. Throughout his younger years, Thomas attended the Bloomsburg area schools, and later graduated from the Bloomsburg High School in 1970. He expanded his education by completing several courses at Penn State and Mansfield Universities. As a businessman, he served with Laubach Auto Parts of Bloomsburg as an employee and a co owner for over 40 years. He retired in 2014. On October 14, 1978, Thomas married his loving wife, Kathleen M. (Daily) Johnson of Bloomsburg. TR grew up in the Methodist faith. He chose, along with his wife, to raise their children in the Catholic faith; he chose to then be confirmed in the Catholic faith on November 9, 2015 by Monsignor Lawrence. TR helped pioneer the sport of hang gliding in the early 1970's. Long before instructors and regulations, he and his uncle Bob Laubach taught themselves to fly by jumping off small local hills. He continued for 40 years, flying numerous sites on both coasts and Mexico. His last flight was in Groveland, FL in March 2015. Thomas also enjoyed spending his time golfing, skiing/snowboarding, and he maintained an active interest in pursuing alternative energy sources. A treasured site for him and his family was Hyner Run State Park in Renovo, PA. Holiday weekends spent flying and camping in his beloved "Westy" were among the Johnson's fondest memories. Survivors in addition to his parents include his beloved wife, Kathleen M. (Daily) Johnson; daughter, Monica C. Johnson; son, Mitchell T. Johnson all of Bloomsburg; sister, Laurie Gaylord and husband, Marc, of Hobe Sound, FL and brother, Curtis W. Johnson of Bloomsburg, Aunt Joan Kelchner of State College, many uncles, nieces, nephews, and cousins. He was a beloved member of his family by marriage, the Dailys. TR worked and played hard. To those who knew him well, he will be remembered as a loyal friend who always had your back. A time of Visitation for family and friends will be held on Sunday, August 28, 2016 from 4:00 pm to 7:00 pm at the Allen Funeral Home, Inc., 745 Market at Eighth St.,Bloomsburg. A Mass of Christian Burial will begin on Monday, August 29, 2016 at 10:00 am in St. Columba Catholic Church, Third and Iron Sts., with Monsignor Robert E. Lawrence, officiating. Graveside committal services will immediately follow in the New Rosemont Cemetery, Bloomsburg. The Allen Funeral Home, Inc., is honored to be serving the Johnson family. Memorial contributions in Thomas' name are suggested to: Bloomsburg Food Cupboard 329 Center St. Bloomsburg PA 17815, or to the Foundation for Free Flight, to preserve hang gliding at Hyner Run, PA. Contact Donnita Hall, Executive Director, PO Box 1290, Windsor CA 95492 or [email protected]

At home with family and feeling the love of countless others, Thomas R. "TR" Johnson , age 64, of Bloomsburg, died on Monday, August 22, 2016. He confronted the monster that is ALS with the same tenacity and perseverance with which he lived... View Obituary & Service Information

The family of Thomas R. Johnson created this Life Tributes page to make it easy to share your memories.

At home with family and feeling the love of countless others,...

Send flowers to the Johnson family.