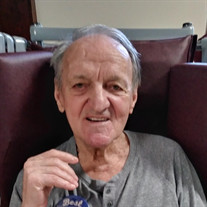 Thomas R. Ernst, Sr., age 81, of Bloomsburg, died on Thursday, July 27, 2017, at the home of his daughter in Scott Twp. Thomas was a resident of his home in Bloomsburg for over 50 years. Thomas was born on Wednesday, August 7, 1935 in Ashland, PA, a son of the late Harry Lamar and Margaret Louise (Krebs) Ernst. Thomas graduated from the former Scott Twp. High School in 1953. Following high school, Thomas faithful served his country in the military and was honorable discharged from the US Army and afterward he fulfilled his reserve duty. For over 40 years, Thomas was self employed and was owner and operator of Ernst Tree Service. Thomas was a member of the Trinity United Methodist Church, Espy. He was also a member of the Bloomsburg Elks Lodge #436, a life member of the Espy Fire Co., and the Bloomsburg American Legion Post #273. He enjoyed spending his time fishing and hunting, being involved in community service projects especially the Espy Fire Co. Bingo Night and he enjoyed raising chickens. Tom will be remembered for his roller skating abilities. Above all, Tom loved spending time with his family. In addition to his parents, Thomas was also preceded by grandson: Kevin T. Latsha; siblings: Harry Ernst, Robert Ernst, Sarah Hill, and Sandy Ernst. Survivors include his children: Thomas Richard Ernst, Jr. of Bloomsburg, Denise Michele Latsha of Bloomsburg, and Mark Benjamin Ernst of Plymouth; grandchildren: Nakysha Latsha, Elizabeth Ernst, and Maria Ernst; 3 great grandchildren; siblings: Donald Ernst of Bloomsburg and Audrey Rosinski of Ashland, and his former wife, Judith Ann (Robbins) Ernst of Bloomsburg. A time of Visitation for family and friends will be held on Sunday, July 30, 2017 from 4:00 pm to 6:00 pm at the Allen Funeral Home, 745 Market at Eighth St., Bloomsburg Inc. in Bloomsburg. Elks services will be held at 5 pm. Funeral Services will begin on Monday, July 31, 2017 at 10:00 am at the Allen Funeral Home, Inc. with Rev. Greg Moore, American Legion Commander, officiating. Military honors will be presented by a combined group of veterans. The Allen Funeral Home, Inc., is honored to be serving the Ernst family. Memorial contributions in Thomas' name are suggested to: Espy Fire Co. 300 Tenny St., Bloomsburg, PA 17815. Friends and family wishing to send a memorial gift, share a personal memory or offer condolences to the family, a Memorial Tribute Page in Thomas’ honor and a Sympathy Store are available at www.Allen FuneralHome.com.

Thomas R. Ernst, Sr., age 81, of Bloomsburg, died on Thursday, July 27, 2017, at the home of his daughter in Scott Twp. Thomas was a resident of his home in Bloomsburg for over 50 years. Thomas was born on Wednesday, August 7, 1935 in Ashland,... View Obituary & Service Information

The family of Thomas R. Ernst Sr. created this Life Tributes page to make it easy to share your memories.

Send flowers to the Ernst family.