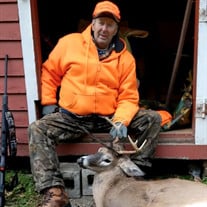 Thomas Lee Bauman, age 77, of Mainville, a devoted Pappy, avid hunter, United States Coast Guard Veteran and Deputy Warden, passed away on Sunday morning, February 13, 2022, at the Geisinger Bloomsburg Hospital surrounded by his loving wife, Nancy, and daughter, Tami. He suffered many years with heart issues. This past year he fought a courageous battle with cancer. He was born on September 18, 1944, at the Bloomsburg Hospital. He was the son of the late Karl J. and Arlene E. (Artley) Bauman. Thomas and his loving wife, Nancy Lee (Derr) Bauman celebrated their 52nd wedding anniversary on May 31, 2021. A 50th wedding anniversary celebration was held with family and friends in May 2019. Thomas was a student of the last graduating class of Catawissa High School in 1962. He played baseball and basketball and was nicknamed "Tomkat!" He faithfully served his country in the United States Coast Guard from January 1965-1969. He was a Second-Class Petty Officer. He was on the Lilac and Westwind Icebreakers for 44 months. He served as Deputy Warden at the Columbia County Prison for 39 years and retired in January of 2015. During that time, he also served as acting Warden throughout many vacancies. He worked at Magee Carpet Company as a loom fixer in his younger years, prior to enlisting in the US Coast Guard. He was a member of the Catawissa American Legion for 53 years and a Life Member of the Catawissa VFW. He was a former member of the Catawissa Blue Lodge until it dissolved and then he became a member of the Elysburg Blue Lodge, where he received recognition for 50 years of membership. He also belonged to the Caldwell Consistory (32nd degree) where he was also recognized for 50 years of membership. He was a member of Emanuel Lutheran Church, Mainville, a member of the Mainville Fire Company and the Mainville Sportsmen's Club. His hobbies included spending time with his family, hunting, cooking, and especially spending time with his granddaughters, Karlene and Kinsley Wiehe, whom he absolutely adored and were his pride and joy. To say Tom was an avid hunter is an understatement. From the time he was diagnosed with cancer in April, all he wanted to do was to be able to hunt. He shot a 6 point buck the first day of deer season on the property where he grew up. It was truly a miracle and a blessing after all he had endured. He is now on his last hunt. His hunt for peace! May he find many big bucks in Heaven! "To know him, was to love him!" Surviving in addition to his loving wife, Nancy, is his daughter Tami Wiehe, Catawissa, wife of Patrick Wiehe, Tara Seely, Chester, Virginia, wife of Brian Seely, and two granddaughters, Karlene and Kinsley Wiehe. He is also survived by several nieces and nephews. He was preceded in death by his brother, Gary E. Bauman. A time of visitation for family and friends will be held on Friday, February 18, 2022, from 9:00 am to 10:00 am at the Allen Funeral Home, Inc., 745 Market at Eighth streets, Bloomsburg. The family respectfully requests that masks be worn. Funeral Services will begin on Friday, February 18, 2022, at 10:00 am at the Allen Funeral Home, Inc. with Rev. Christine Kirchner and Pastor Tormod Svensson, officiating. Graveside committal services will immediately follow in Elan Memorial Park, Bloomsburg with military honors presented by the VFW and American Legion Honor Guard. The Allen Funeral Home, Inc., is honored to be serving the Bauman family. Memorial contributions in Thomas' name are suggested to: The Main Township Volunteer Fire Company, 2234 Firehall Lane, Bloomsburg, PA 17815.

The family of Thomas Lee Bauman created this Life Tributes page to make it easy to share your memories.

Send flowers to the Bauman family.