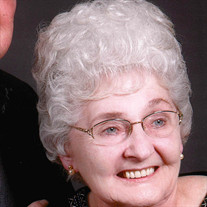 Theresa Irene Dancho, 88, of Catawissa passed away Wednesday afternoon, Aug. 9, 2017, at Geisinger Medical Center, Danville, surrounded by her family. She was born April 25, 1929, a daughter of the late Edward F. and Agnes (Petro) Graboski. Her early life was spent in Shamokin. A member of Our Lady of Mercy Church, Slabtown, she was the widow of John Dancho, who passed away July 27, 2015. A brother and half sister also died previously. She enjoyed her flower gardens and collecting cookbooks. She is survived by a son, Wayne J. Dancho and his wife, Linda, Catawissa; two granddaughters: Laurie N. Hilborn and her husband, Christopher, Yorktown, Virginia, and Kellie Dancho Chavey and her husband, Edwin, Burbank, California; four great-grandchildren: Guinevere, Nicholas and Ashleigh Hilborn and Sydney Chavey; two sisters: Marie Monkiewicz and husband, Daniel, Danville, and Rozann Grasley and husband, Randall, rural Benton (Talmar); two brothers: Edward P. Graboski and wife, Nancy, Catawissa, and Ronald M. Graboski and wife, Patricia, Northumberland; several nieces and nephews and great-nieces and great-nephews. According to Theresa’s wishes, funeral services will be private, with her pastor, the Rev. Dennis Dalessandro as officiant. The Allen Funeral Home Inc., Market and Eighth streets, Bloomsburg, is honored to serve the Dancho family. For friends and family wishing to send a memorial gift, share a personal memory or offer condolences to the family, a Memorial Tribute Page in Theresa’s honor and a Sympathy Store are available at www.Allen-FuneralHome.com.

The family of Theresa I. Dancho created this Life Tributes page to make it easy to share your memories.

Send flowers to the Dancho family.