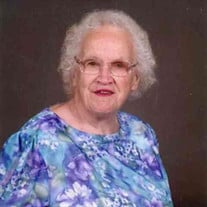 Thelma F. (Ernest) Williams, age 100, of Scotch Valley (Bloomsburg), passed away on Tuesday, July 21, 2020, a resident of Bonham Nursing & Rehabilitation Center in Stillwater. Thelma was a resident of her home in Beaver Twp. for over 73 years. She was born on Saturday, February 14, 1920 in Cleveland Twp., a daughter of the late John and Lottie (Gotshall) Ernest. Thelma received her education by attending the Lawrence One Room School House in Franklin Twp. Thelma was married to her loving husband, Allen C. Williams, who preceded her in death on February 25, 2006. Thelma was employed as a seamstress in the textile industry. She was the oldest member of St. Peter's (Harger's) United Church of Christ, where she previously served on the church consistory. She also had served as Vice President of St. Peter's United Church of Christ Ladies Group, was an usher & greeter for the church until her mid 90's and continued to help at the annual church dinner. Thelma was very talented in sewing and made clothing for her family for many years. She loved working in the family garden behind the house with her husband. She would preserve and can the spoils from the vegetable garden to be sold or shared with friends and family. Friends will always remember her beautiful flower garden. In addition to her parents and husband, Thelma was also preceded in death by three brothers, Walter Ernest, Marion (Jim) Ernest and Howard Ernest, and four sisters, Hazel Rhodes, Edna Shultz, Mary Morrow and Pearl Bickert. Survivors include her two beloved children; a son, Gary L. Williams of Bloomsburg and a daughter, Lois J. Williams of Catawissa, a sister, Irene Moser of Bloomsburg, a brother, Carl Ernest and wife Mary Anna of Berwick. She was known as "Nanny Thelma" to brothers; Devin Bankes and his children; Joey, Jamie, and Fynnegan and Derek Bankes. A time of visitation for family and friends will be held on Monday, July 27, 2020 from 10:00 am to 11:00 am at St. Peter's United Church of Christ, 114 Beaver Valley Road, Bloomsburg. Funeral services will begin on Monday, July 27, 2020 at 11:00 am at St. Peter's United Church of Christ with Rev. Christine Kirchner, officiating. The church is requesting those attending to wear masks and practice social distancing. The services will also be live streamed to: Mountain Grove Lutheran Parish ELCA. Graveside committal services will immediately follow in Elan Memorial Park, Lime Ridge. The Allen Funeral Home, Inc., 745 Market at Eighth Streets, Bloomsburg is honored to be serving the Williams family. Memorial contributions in Thelma's name are suggested to: St. Peter's United Church of Christ, 114 Beaver Valley Road, Bloomsburg, PA, 17815

Thelma F. (Ernest) Williams, age 100, of Scotch Valley (Bloomsburg), passed away on Tuesday, July 21, 2020, a resident of Bonham Nursing & Rehabilitation Center in Stillwater. Thelma was a resident of her home in Beaver Twp. for over... View Obituary & Service Information

The family of Thelma F. (Ernest) Williams created this Life Tributes page to make it easy to share your memories.

Send flowers to the Williams family.