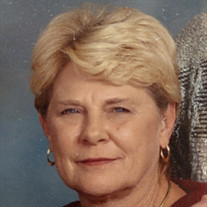 Susan H. Krum, age 70, of Bloomsburg , passed away on Monday, November 11, 2019, at her Scott Twp. home. Susan was a resident of Bloomsburg all of her life. She was born on Wednesday, April 13, 1949 in Bloomsburg, a daughter of Blanche L. (Flick) Hartman and the late Cortez K. Hartman. Throughout her younger years, Susan attended the Bloomsburg area schools, and later graduated from the Central Columbia High School in 1967. On June 29, 1968, Susan married her loving husband, Larry L. "P nut" Krum, who preceded her in death on January 14, 2018. For many years, Susan was employed as a Secretary for P Nut Bowl and Valley Toy Distributors until her retirement. Susan was a member of the Shiloh Bible Church, Bloomsburg. She enjoyed spending her time bowling, fishing, and spending time at the family lake house at Big Bass Lake in Gouldsboro, PA. In addition to her father and husband, Susan was also preceded in death by a brother in law, Harvey Shaffer. Survivors include her mother, Blanche L. Hartman of Bloomsburg, her beloved children, a daughter, Julie wife of Darin Hock of Bloomsburg, a son, Jason L. Krum and wife Tiffany of Bloomsburg, four grandchildren; Ellexis L. wife of Ryan Young, Hunter L. Krum, Crue K. Hock, and Cole K. Hock, two sisters, Sharon K. wife of Jack Devlin of Bloomsburg, and Stephanie S. wife of Rick Hill of Berwick, and a sister in law, Shirley Shaffer of Bloomsburg. Private services will be held at the convenience of the family. She will be laid to rest next to her husband in Elan Memorial Park, Lime Ridge. The Allen Funeral Home, Inc., 745 Market at Eighth Streets, Bloomsburg is honored to be serving the Krum family. Memorial contributions in Susan's name are suggested to: Shiloh Bible Church, 123 Church St., Bloomsburg, PA 17815. Friends and family wishing to send a memorial gift, share a personal memory or offer condolences to the family, a Memorial Tribute Page in Susan’s honor and a Sympathy Store are available at www.Allen-FuneralHome.com.

Susan H. Krum, age 70, of Bloomsburg , passed away on Monday, November 11, 2019, at her Scott Twp. home. Susan was a resident of Bloomsburg all of her life. She was born on Wednesday, April 13, 1949 in Bloomsburg, a daughter of Blanche... View Obituary & Service Information

The family of Susan H. Krum created this Life Tributes page to make it easy to share your memories.

Send flowers to the Krum family.