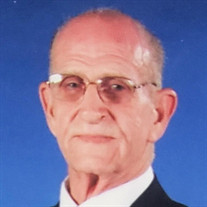 Stetler Hurley "Barney" Honabach, age 85, of Catawissa, passed away peacefully at his residence on Saturday, February 27, 2021, with his two sons by his side. Born in Aristes on April 8, 1935, Stetler “Barney” Honabach was the son of the late Francis Stetler and Hannah (Brobst) Honabach. Barney and his late wife Marianne, built their home on her families homestead in Roaring Creek Valley, where Barney resided until his death. Barney had many skills and numerous occupations but his tenure was with Kerris & Helfrick Strip Mining Company, and then he was semi-retired at the early age of 50 to spend precious time with his wife and sons. Unable to take on the retired label, Barney was a hobbyist and was well known to be an avid trader of goods. He was a frequent attendee to auctions, estate and yard sales. Barney was a lifetime member of the St. Peter’s Evangelical Lutheran Church, Aristes. He was a member of many clubs and organizations, including Catawissa VFW, American Legion, Roaring Creek CB Club, Southside Snow Drifters, Dunahoe Hunting Club, Wilburton #2 Hose Company, Shenandoah Fish & Game Club, Brothers of the Brush, and the Catawissa Eagles. Barney was an avid outdoorsman who enjoyed hunting, fishing, snowmobiling, and vacationing at the shore. Barney was very active with the hunting club and enjoyed hunting with his sons and brothers. He had numerous hunting stories that he enjoyed sharing with family and friends. Barney enjoyed his countless summer vacations at the beaches of South Jersey, from campground memories with his family, siblings, nieces and nephews to later in life at his “summer home” at his son’s place. Barney was a big guy in life with a huge heart, and always willing to lend a helping hand to family, friends, neighbors and the various clubs he belonged to. He lived an active life with numerous experiences and stories he was willing to share with all. Barney greatly enjoyed spending time with his large extended family, he never missed a special occasion or even a child’s birthday party. He was a very giving man. In addition to his parents, Barney was also preceded in death by his loving wife, Marianne (Baran) Honabach, with whom he shared 35 years of his life, his infant son David Keith Honabach, a brother Marvin and a sister Rosie. He is survived by his two beloved sons, Albert Stetler Honabach and his wife Machal (Yeager) Honabach and Mark Francis Honabach and his partner William J. Wiseley, Barney's longtime companion of 31 years, RoseAnn M. Lukus, three brothers, Maynard, Wayne, Dale, and five sisters, Mary Ellen, Luella, Cleo, Lois, and Wilmetta. In addition, Barney will be missed by his extended family and friends and also his “bench buddies” he would socialize with on a sunny day on the boardwalk. All are welcome to join the Honabach family at the gravesite service on Saturday March, 20, 2021 at 1:00 pm at St. Paul’s Lutheran Cemetery, 27 Ringtown Mountain Road, Numidia with Pastor Gordon E. Smith, officiating. The Allen Funeral Home, Inc., 745 Market at Eighth Streets, Bloomsburg is honored to be serving the Honabach family. Memorial contributions in Stetler's name are suggested to: Geisinger Hospice, 74 Schoolhouse Road, Suite 104, Danville, PA 17821.

The family of Stetler H. "Barney" Honabach created this Life Tributes page to make it easy to share your memories.

Send flowers to the Honabach family.