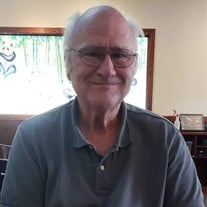 Stephen R. Wiist , age 74, of Bloomsburg, passed away on Monday, October 15, 2018, at his Scott Township home. Stephen was a resident of his home in Bloomsburg for over 25 years. He was born on Friday, August 18, 1944 in Evansville, IN, a son of the late William E. and Mabel (Trautvetter) Wiist. Throughout his younger years, Stephen attended the Evansville, IN area schools, and later graduated from the Bosse High School, Evansville in 1962. He expanded his education by graduating from the University of Evansville with a B.A degree in 1966, Indiana State University with a Master's in Library Science Degree in 1971, University of Michigan with Master's in Library Science Degree in 1974, M.A. Degree from State University of New York, Oneota, NY in 1974 and Columbia University, New York City, NY in 1988. On December 27, 1969, Stephen married his loving wife, the former Adelaide Martinez, who preceded him in death on December 13, 2016. Since 1992 he was employed by Bloomsburg University as an Associate Professor of Library Science until his retirement in 2010. While at Bloomsburg University he served on the Library Department Tenure Committee, Library Faculty Development and Evaluation Committee, Library Advisory Committee, University Wide Promotion Committee and the University Conduct Board. He previously worked in Library Science for Columbia University, NY from 1991 1993 and United States Merchant Marine Academy from 1975 1991. He was a member of the Bloomsburg Historical Society for many years. Stephen enjoyed spending time with his family, and taking care of his dogs; Tiberius and Sienna as well as his cats; Eskimo Earl, Brilla, Pumpkin and Mr. Doodles. He was known as a very friendly neighbor who kept a well groomed lawn. Survivors include his three children; Dr. Stephen W. Wiist of Cary, NC; Andrew A. Wiist of Mechanicsburg; Catherine M. Wiist of Bloomsburg; and a brother, William E. Wiist and wife Pamela of Evansville, IN. Private services will be at the convenience of the family. The Allen Funeral Home, Inc., 745 Market St., Bloomsburg is honored to be serving the Wiist family. Memorial contributions in Stephen's name are suggested to: SPCA 2801 Bloom Road Danville, PA 17821. Friends and family wishing to send a memorial gift, share a personal memory or offer condolences to the family, a Memorial Tribute Page in Stephen’s honor and a Sympathy Store are available at www.Allen FuneralHome.com.

Stephen R. Wiist , age 74, of Bloomsburg, passed away on Monday, October 15, 2018, at his Scott Township home. Stephen was a resident of his home in Bloomsburg for over 25 years. He was born on Friday, August 18, 1944 in Evansville, IN, a... View Obituary & Service Information

The family of Stephen R. Wiist created this Life Tributes page to make it easy to share your memories.

Send flowers to the Wiist family.