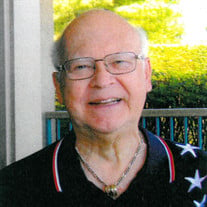 Dr. Stephen Charles Wallace, age 78, of Bloomsburg, departed this life to be with his Lord and Savior and return to his wife Jeannine (Russell) Wallace on Thursday, October 17, 2019. Stephen was born on Sunday, March 30, 1941 in Huntingdon, PA, a son of the late Harris Taylor Wallace, who passed in 1998 and Ruth (Burkholder) Wallace who passed in 1995. Stephen graduated from Huntingdon Area High School in 1959. An avid musician, he performed both vocally and instrumentally on trumpet and alto horn. He earned his B.S. in Music Education degree in 1963 from Mansfield University, Mansfield, PA, his Master of Music degree in 1968 from The University of Michigan, and his Doctor of Education degree in Music Education in 1979 from Penn State University. He taught music as band director in Ashland, PA from 1963-1967 and was then invited to become a member of The Bloomsburg University music faculty in 1967 as an instructor. There he taught both marching and concert bands, jazz band, harmony and theory; ear training and specialized music history courses. He was elected Chairperson of Music at Bloomsburg from 1981 through 1996. He earned full professorship status there, retiring in 1998 as Professor Emeritus. His ensembles performed in a variety of locations in the U.S. and abroad. He directed Broadway style musicals; played in three community bands and was director in one. Additionally he was a brass quintet player( "Brass Menagerie"), organized a second ("Craggy Top Brass") in Tennessee, member and director in The Barbershop Harmony Society and sang baritone ("Shortway Sharps") and lead in "Time and Again" quartet in Tennessee. He played trumpet in the "Pennsylvania Alpiners" German band and directed the "Little German Band" in State College on an interim basis. He sang with the State College Choral Society and the Heritage Singers. He was also a prolific arranger and composer. He and his wife Jeannine lived in the East Tennessee Knoxville area, community of Maryville from 2008 until 2014. Upon his return to Bloomsburg, he rejoined The Catawissa Military Band, the Danville Community Band, the First English Baptist Church choir, the Danville Community Singers and The Jubilate Choir. He also directed "Seasoned Sounds" from 2016, the adult big band he founded in 1998 and directed until 2005. Professor Wallace had several professional affiliations including College Band Directors National Association, Phi Mu Alpha Sinfonia music fraternity and the Phi Beta Mu Pennsylvania Bandmaster's Association. He was an active officer with the Sons of Union Veterans of the Civil War. Dr. Wallace was preceded in death by his wife, Jeannine Russell Cavalieri Wallace. He was formerly married to Grace Paul Wallace and Donna Kay Moran Wallace. He had two daughters with Grace, Carolyn Wallace Sweeney and husband Mark, of Mifflinville, PA and Barbara Wallace Riley and husband Chad of Bloomsburg, a stepson, Craig Cavalieri and wife Jennifer of Aliso Viejo, CA, a stepdaughter, Monica Cavalieri Torres and husband Mario of Davenport, FL. There are five grandchildren: Madison Mall, Taylor Sweeney, Kendra Sweeney, Dalton Riley and Brianna Riley a step grandson, Lathan Torres, a niece, Laurie Wallace of West Friendship, MD and a sister in law, Elaine Reed and husband Gary of McAlevy's Fort, PA. Along with his parents and wife, he was preceded in death by a brother William Wallace in 2010. A time of visitation for family and friends will be held Saturday, November 2, 2019 from 10:00 am to 11:00 am at The First English Baptist Church, 700 Millville Road, Bloomsburg, where he was a lifetime member. A Celebration of Life Service will begin at 11:00 am with Rev. Dr. Lee Barnhardt, officiating. Graveside committal services will be private in the Huntingdon County Memorial Gardens in Walker Twp., Huntingdon County, PA. The Allen Funeral Home, Inc., 745 Market at Eighth Streets, Bloomsburg is honored to be serving the Wallace family. Memorial contributions in "Doc's" name are suggested to: The Bloomsburg University Music Scholarship Fund c/o Bloomsburg University Foundation, 50 East Main St., Bloomsburg, PA 17815. Friends and family wishing to send a memorial gift, share a personal memory or offer condolences to the family, a Memorial Tribute Page in Stephen’s honor and a Sympathy Store are available at www.Allen FuneralHome.com.

Dr. Stephen Charles Wallace, age 78, of Bloomsburg, departed this life to be with his Lord and Savior and return to his wife Jeannine (Russell) Wallace on Thursday, October 17, 2019. Stephen was born on Sunday, March 30, 1941 in Huntingdon,... View Obituary & Service Information

The family of Dr. Stephen Charles Wallace created this Life Tributes page to make it easy to share your memories.

Send flowers to the Wallace family.