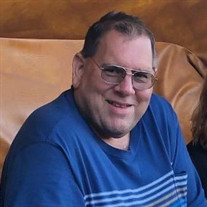 Stephen L. Lizardi, age 61, of Bloomsburg, passed away on Tuesday, December 3, 2019, a patient of the Geisinger Medical Center in Danville, with his loving family by his side. Stephen was a lifelong resident of Bloomsburg. He was born on Saturday, December 28, 1957 in Bloomsburg, a son of the late Stanley and Anna (Evans) Lizardi. Stephen graduated from the Bloomsburg High School in 1975. He honorably served his country in the U.S. Army. On May 27, 2006, Stephen married his loving wife, the former Linda D. Straub. For over 32 years, he was employed by JM Smuckers and formerly Heinz Pet Products, Bloomsburg as a Machine Operator. Stephen was a member of St. John's Evangelical Lutheran Church, Mifflinville and a member of the Bloomsburg American Legion Post #273. Stephen enjoyed spending his time fishing, watching the Philadelphia Phillies and Philadelphia Eagles and traveling with his wife, Linda on bus trips. He loved spending time with his family, especially his grandchildren. In addition to his parents, Stephen was also preceded in death by a brother, Joe Lizardi, and two sisters, Mary Hubbard, and Kathy Birt. Survivors include his beloved wife of 13 years, Linda D. Lizardi, at home, three stepdaughters, Susan A. wife of Neil Young of West Milton, Heather L. Taggart and spouse Dana Yaremchak of Milton, Jessica E. Taggart of Milton, two grandchildren, Connor T. Young, Haley A. Young, a sister, Elizabeth "Betty" Hnylanski of Bloomsburg, two sister in laws, Sharon wife of Jeffrey Kitchens of Richfield, PA, Judy wife of Paul Martin of Lewisburg, an aunt, Beatrice Evans of Bloomsburg, as well as many loving nieces, nephews, great nieces and great nephews. A time of Visitation for family and friends will be held on Saturday, December 7, 2019 from 10:00 am to 11:00 am at the Allen Funeral Home, Inc., 745 Market at Eighth Streets, Bloomsburg. Funeral Services will begin on Saturday, December 7, 2019 at 11:00 am at the Allen Funeral Home, Inc. with his brother in law, Pastor Jeffrey Kitchens, officiating. Military honors will be provided by a combined American Legion and V.F.W. groups. The Allen Funeral Home, Inc., is honored to be serving the Lizardi family. Memorial contributions in Stephen's name are suggested to: American Kidney Fund, 11921 Rockville Pike, Suite 300, Rockville, MD 20852. Friends and family wishing to send a memorial gift, share a personal memory or offer condolences to the family, a Memorial Tribute Page in Stephen’s honor and a Sympathy Store are available at www.Allen-FuneralHome.com.

Stephen L. Lizardi, age 61, of Bloomsburg, passed away on Tuesday, December 3, 2019, a patient of the Geisinger Medical Center in Danville, with his loving family by his side. Stephen was a lifelong resident of Bloomsburg. He was... View Obituary & Service Information

The family of Stephen L. Lizardi created this Life Tributes page to make it easy to share your memories.

Stephen L. Lizardi, age 61, of Bloomsburg, passed away on Tuesday,...

Send flowers to the Lizardi family.