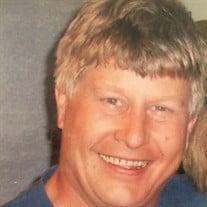 Stephen J. Anceravage, age 55, of Bloomsburg, passed away on Friday, February 22, 2019, at his home in Bloomsburg. Stephen was a lifelong resident of Bloomsburg. He was born on Thursday, March 14, 1963 in Bloomsburg, a son of the late Vincent J. Anceravage and Geraldine (Stout) Anceravage Kern. Throughout his younger years, Stephen attended the Bloomsburg area schools, and later graduated from Bloomsburg High School in 1981. He was well known as a hardworking athlete, particularly in football and wrestling. He expanded his education by attending the former Williamsport Area Community College, graduating in 1984. On December 4, 2005, Stephen married his loving wife, the former Ruth A. Guyer. Stephen was very proud that he was a self employed Plumber and owner of A & A Plumbing and Heating. One of his greatest joys was watching his children, nieces and nephews participate in all their sporting events. Stephen loved spending time participating in and coaching wrestling, baseball and football. He enjoyed watching Penn State football and wrestling as well as Cornell wrestling. His favorite professional teams are the Pittsburgh Steelers and San Diego Padres. He was of the Christian faith. In addition to his parents, Stephen was also preceded in death by a brother, John Edward Anceravage, two aunts Blanche Anceravage and Claudette Stout, as well as grandparents, including Leroy and Winifred Stout. Survivors include his beloved wife of 13 years, Ruth A. Guyer Anceravage, two sons, Bo S. Anceravage and Xavier C. Dickerson, both of Bloomsburg, a sister, Connie L. wife of Paul Yurczyk of San Diego, CA, a brother, Vincent "Bo" Anceravage and wife Lisa of Bloomsburg, two uncles, Stephen R. Stout and wife Trudy of Mifflinville, and Alvin Anceravage of Annadale, VA and many loved nieces and nephews. A time of Visitation for family and friends will be held on Sunday, March 3, 2019 from 3:00 pm to 5:00 pm at the Allen Funeral Home, Inc., 745 Market at Eighth Streets, Bloomsburg. Funeral Services will begin on Monday, March 4, 2019 at 10:00 am at the Allen Funeral Home, Inc., Bloomsburg, with Rev. Jay Jones, pastor of Trucksville United Methodist Church, officiating. The Allen Funeral Home, Inc., is honored to be serving the Anceravage family. Friends and family wishing to send a memorial gift, share a personal memory or offer condolences to the family, a Memorial Tribute Page in Stephen’s honor and a Sympathy Store are available at www.Allen FuneralHome.com.

The family of Stephen J. Anceravage created this Life Tributes page to make it easy to share your memories.

Stephen J. Anceravage, age 55, of Bloomsburg, passed away on...

Send flowers to the Anceravage family.