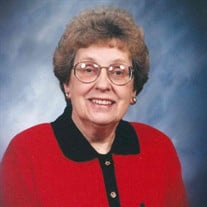 Shirley Krum Thomas, age 88, of Bloomsburg, passed away on Wednesday, January 19, 2022, a patient of Brookdale Assisted Living of Bloomsburg. Shirley was a resident of Bloomsburg all of her life. She was born on Wednesday, February 1, 1933, in Bloomsburg, a daughter of the late Clayton and Verna (Bittner) Krum. Shirley graduated from the former Scott Twp. High School in 1951 and The Bloomsburg State Teachers College in 1956. On January 18, 1954, Shirley married her loving husband, William E. "Bill" Thomas who preceded her in death on October 5, 2018. Shirley was employed at North Centre Elementary School and later as a Central Columbia Middle School Teacher for a total of 32 years until her retirement in 1993. She was a member of St. John Lutheran Church, Espy for 80 years where she and her husband helped with the bulletins. She was also a member of The Pennsylvania Education Association and a former member of The Berwick Senior Center. Shirley enjoyed spending her time traveling and was an avid reader. In addition to her parents, and husband, Shirley was also preceded in death by a daughter-in-law, Amy J. Thomas, and two sisters, Erma Thomas and Marie Young. Survivors include her three beloved children: a daughter, Carol M. Keller and husband Robert of Bloomsburg, two sons, Clay W. Thomas of Bloomsburg and Jeffrey L. Thomas of Bloomsburg and his girlfriend Melanie Revak. A time of visitation for family and friends will be held on Wednesday, January 26, 2022, from 10:00 am to 11:00 am at the Allen Funeral Home, Inc., 745 Market at Eighth Streets, Bloomsburg. Funeral Services will begin on Wednesday, January 26, 2022, at 11:00 am at the Allen Funeral Home, Inc. with her pastor, Rev. Gordon E. Smith, officiating. Graveside committal services will immediately follow in New Rosemont Cemetery, Espy. The Allen Funeral Home, Inc., is honored to be serving the Thomas family. Shirley's family would like to thank the staff of Brookdale Assisted Living and Commonwealth Hospice for their kind and compassionate care. Memorial contributions in Shirley's name are suggested to: St. John Lutheran Church, 2575 Old Berwick Road, Bloomsburg, PA 17815.

The family of Shirley Krum Thomas created this Life Tributes page to make it easy to share your memories.

Shirley Krum Thomas, age 88, of Bloomsburg, passed away on Wednesday,...