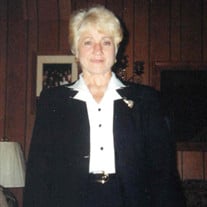 Shirley A. (Colley) Oxenrider, age 81, of Bloomsburg, died on Thursday, December 24, 2020, a resident of the Emmanuel Nursing Center in Danville. Shirley was a resident of her home in Bloomsburg for eight years and formerly lived in Espy for 47 years. Shirley was born on Tuesday, February 21, 1939 in Montgomery, Alabama, a daughter of the late Andrew Lee and Myrtle O'Neal (Martin) Colley. Throughout her younger years, Shirley attended the Montgomery, Alabama area schools. On February 23, 1957, Shirley married her loving husband, Clinton John Oxenrider, who died on February 16, 2016. For over 24 years, Shirley was employed by Bloomsburg University Book Store as a clerk until her retirement in 1996. Shirley was a member of the Shiloh Bible Church, where she was active with the Happy Group. She was also a member of the Women's Christian Temperance Union and the Local Red Hat Society. Shirley enjoyed spending her time making floral arrangements and especially enjoyed spending time with her grandchildren. In addition to her parents and husband, Shirley was also preceded by a grandson, Austin Gage Oxenrider on April 1, 2017 and eight siblings. Survivors include her four children: Clinton John Oxenrider, Jr. and husband, Bill, of Haymarket, VA; Deborah A. Lehman and husband, Bob, of Bloomsburg, Barry Lee Oxenrider and wife, Dennine, of Bloomsburg, and Garry Lyn Oxenrider and wife, Janet, of Bloomsburg, eight grandchildren, and 17 great-grandchildren. A time of Visitation for family and friends will be held on Wednesday evening, December 30, 2020 from 4:00 pm to 6:00 pm at the Allen Funeral Home, Inc., 745 Market at Eighth St., Bloomsburg. Funeral Services will begin on Thursday morning, December 31, 2020 at 10:00 am at the Allen Funeral Home, Inc. with her pastor, Rev. Dr. Douglas H. Lyon, officiating. Graveside committal services will immediately follow in the Elan Memorial Park. The Allen Funeral Home, Inc., is honored to be serving the Oxenrider family.

Shirley A. (Colley) Oxenrider, age 81, of Bloomsburg, died on Thursday, December 24, 2020, a resident of the Emmanuel Nursing Center in Danville. Shirley was a resident of her home in Bloomsburg for eight years and formerly lived in Espy for... View Obituary & Service Information

The family of Shirley A. Oxenrider created this Life Tributes page to make it easy to share your memories.

Send flowers to the Oxenrider family.