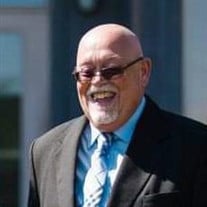 Scott D. Bitler, age 60, of Bloomsburg, passed away on Tuesday, February 19, 2019, a patient of the Geisinger Medical Center in Danville. Scott was a resident of his home in Main Twp. for over 27 years. He was born on Friday, January 2, 1959 in Danville, the son of Janet D. (Bergenstock) Bitler and the late Ernest B. Bitler, who died on February 9, 2013. Throughout his younger years, Scott attended the Bloomsburg area schools, and later graduated from the Bloomsburg High School in 1977. He faithfully served his country in the U. S. Army. On August 21, 2017, Scott married his loving wife, the former Deborah S. (Smedley) Klinger. For over 36 years, Scott was employed by Autoneum Automotive of Bloomsburg. Scott was a member of the Christ United Lutheran Church, Catawissa. He was the President of Saddle Rock Rod and Gun Club, Benton, a member of the Bloomsburg Fire Department and the Bloomsburg Fireman's Relief Association. Scott enjoyed spending his time hunting and accompanying his wife to karaoke, he also enjoyed traveling and being with friends and family. Survivors include his beloved wife who he shared the past 15 years together, Deborah S. Klinger Bitler of Bloomsburg, his mother, Janet D. Bitler of Bloomsburg, a son, Joseph R. Bitler and wife Stephanie of Berwick, two stepsons, Justin F. Klinger and wife Jamie, and Jordan M. Klinger all of Napa, CA, a granddaughter, Payton E. Daum, a grandson, Colton J. Bitler, and a granddaughter expected to be born in June, and one sister, Michele A. wife of David Edgar of Bloomsburg. Along with his father, he was also preceded in death by a close friend, Joseph Ent on February 10, 2013. A time of Visitation for family and friends will be held on Monday, February 25, 2019 from 5:00 pm to 7:00 pm at the Allen Funeral Home, Inc., 745 Market at Eighth Streets, Bloomsburg. Funeral Services will begin on Tuesday, February 26, 2019 at 10:00 am at Christ United Lutheran Church, 116 Church Street, Catawissa with his pastor, Rev. Melody Sell, officiating. Military services will be provided by a combined group of American Legion and V.F.W. veterans. The Allen Funeral Home, Inc., is honored to be serving the Bitler family. Memorial contributions in Scott's name are suggested to: Christ United Lutheran Church Memorial Fund, 116 Church St., Catawissa, PA 17820 or The Bloomsburg Fire Department, 911 Market St., Bloomsburg, PA 17815. Friends and family wishing to send a memorial gift, share a personal memory or offer condolences to the family, a Memorial Tribute Page in Scott’s honor and a Sympathy Store are available at www.Allen FuneralHome.com.

Scott D. Bitler, age 60, of Bloomsburg, passed away on Tuesday, February 19, 2019, a patient of the Geisinger Medical Center in Danville. Scott was a resident of his home in Main Twp. for over 27 years. He was born on Friday, January 2, 1959... View Obituary & Service Information

The family of Scott D. Bitler created this Life Tributes page to make it easy to share your memories.

Send flowers to the Bitler family.