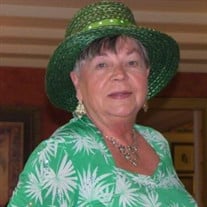 Sandra L. Coombs, age 76, of Bloomsburg, died on Tuesday, August 15, 2017, a patient of the Geisinger Medical Center in Danville. She was a resident of her home in Bloomsburg for over 58 years and had previously lived in Millville. Sandra was born on Thursday, February 27, 1941 in Bloomsburg, a daughter of the late Larue and Aggie (Bull) Fetzer. She graduated from the Millville High School in 1958. Sandra was preceded in death by her loving husband James E. Coombs in January of 2005. Sandra was last employed by Deanna R. Pealer Law Practice as a secretary for many years. She previously worked as a secretary for former, District Magistrate, Donald Holter in Bloomsburg for many years, the former J.S. Raub Shoe Store, Bloomsburg and in early life for her parents at The Quakerette Restaurant, Millville. For the better part of her life, Sandy enjoyed being an active member within her church community, serving breakfast at The Bloomsburg Fire Hall and greeting patients at The Susquehanna Valley Specialties Clinic on Lows Road, Bloomsburg. In addition to volunteering her time she enjoyed donating to various animal charities. Sandy was most known for her sense of style, quick witted humor and giving heart. In addition to her parents and husband, Sandra was also preceded by a son, David A. Coombs on June 6, 2004. Survivors include a daughter, Jami E. Schmid of Bloomsburg, son in law, Michael D. Schmid of Orangeville, daughter in law, Jodi C. Houseknecht of Bloomsburg, six grandchildren, Ali M. wife of Stephen Bednarik, Andrew C. Schmid, Erin T. wife of Michael Beagle, Lauren S. Coombs, Carlie Coombs, Zander J. Houseknecht, great grandson, Liam M. Bednarik, great granddaughter, Adeline G. Bednarik; a sister in law, Audrey Coombs, nephew, Curtis Coombs and a niece, Abbey Mensch. A time of Visitation for family and friends will be held on Saturday, August 19th from 10 to 11 a.m. at the Allen Funeral Home, Inc. 745 Market at Eighth Street in Bloomsburg. Funeral Services will also begin on Saturday at 11 a.m. at the Allen Funeral Home, Inc. in Bloomsburg with Pastor Richard Plocinski, Millville Christian Church and Pastor Nathan King, Geisinger Chaplain, co officiating. The Allen Funeral Home, Inc., is honored to be serving the Coombs family. Memorial contributions in lieu of flowers may be made in Sandy's name are suggested to: Animal Resource Center c/o Linda Bird 301A Boone Road Bloomsburg, PA 17815, in addition there will also be a donation box accepting needed animal supplies during the time of visitation . Friends and family wishing to send a memorial gift, share a personal memory or offer condolences to the family, a Memorial Tribute Page in Sandra’s honor and a Sympathy Store are available at www.Allen FuneralHome.com.

Sandra L. Coombs, age 76, of Bloomsburg, died on Tuesday, August 15, 2017, a patient of the Geisinger Medical Center in Danville. She was a resident of her home in Bloomsburg for over 58 years and had previously lived in Millville. Sandra... View Obituary & Service Information

The family of Sandra L. Coombs created this Life Tributes page to make it easy to share your memories.

Send flowers to the Coombs family.