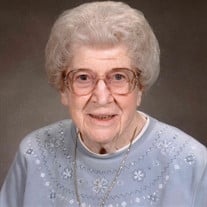 Ruth S. Faux, age 96, of Bloomsburg, passed on to her eternal rest on Wednesday, May 18, 2016, at Brookdale Bloomsburg where she had resided since 2007. Prior to that, Ruth had been a resident of her home on Mainville Drive for over 50 years. Ruth was born on Friday, February 7, 1920 in Main Township, Pennsylvania, a daughter of the late Samuel T. and Blanche (Grouver) Shuman. Throughout her younger years, Ruth attended the Bloomsburg area schools, and later graduated from the Bloomsurg High School in 1937. Ruth expanded her education by attending Empire Beauty School of Hazleton. She worked briefly for Grace Rehm Beauty Shop before getting her dream job as a night supervisor for Bell Telephone. She worked there for ten years before leaving to become a full time homemaker. On May 19, 1945, Ruth married her loving husband, Clemens J. Faux who died August 23, 1999. Ruth assisted him in his State Farm Insurance office on Market Street, Bloomsburg, which he operated for over 33 years. Ruth was a life long member of Emmanuel Lutheran Church, Mainville. She was also a member of the Catawissa Order of Eastern Star. She enjoyed spending her time playing pinochle, and when she was not playing cards, she was happiest while caring for others. Throughout her life, she provided care for her father, father-in-law, several siblings and her husband as they battled various illnesses. Ruth was the last surviving member of her immediate family. In addition to her parents, she was preceded by four brothers: Harold, Ralph , Bruce and Homer as well as two sisters: Pearl Gassert and Jean Zehner. Survivors include her daughter, Penny K.Fetterman and husband, Randall of Catawissa, PA, two grandchildren: Jon R. Fetterman and wife, Jamee, of Carlisle and Joy M. Shehoski and husband, Matthew, of Gilbertsville, PA and four great grandchildren: Jace, Jana and Jax Fetterman and Tanner M. Shehoski. A time of Visitation for family and friends will be held on Monday, May 23, 2016, from 10 to 11 am at the Allen Funeral Home, Inc. 745 Market at Eighth St. Bloomsburg. Funeral Services will begin at 11am, with, Berwick Hospice Chaplain, Rev. Michael Delp, officiating. Graveside committal services will immediately follow in Lime Ridge. The Allen Funeral Home, Inc., is honored to be serving the Faux family. Memorial contributions in Ruth's name are suggested to: Emmanuel Lutheran Church 112 Maple Dr. Bloomsburg PA 17815 or Berwick Hospice 701 East 16th St. Berwick, PA 18603.

Ruth S. Faux, age 96, of Bloomsburg, passed on to her eternal rest on Wednesday, May 18, 2016, at Brookdale Bloomsburg where she had resided since 2007. Prior to that, Ruth had been a resident of her home on Mainville Drive for over 50 years. Ruth... View Obituary & Service Information

The family of Ruth S. Faux created this Life Tributes page to make it easy to share your memories.

Send flowers to the Faux family.