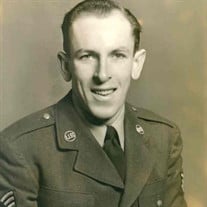 Ross M. Levan, age 91, of Bloomsburg, died on Friday, March 22, 2019, a resident of the Bloomsburg Care and Rehabilitation Center. Ross was a resident of Bloomsburg for over 75 years. Ross was born on Thursday, December 1, 1927 in Newlin, Pennsylvania, a son of the late John and Stella (Keller) Levan. Throughout his younger years, Ross attended the Locust Township school, and later graduated in 1945. Ross expanded his education by attending Philadelphia Military School just prior to his enlistment in the United States Army on December 21, 1945. During World War II, he served his country faithfully while stationed in Guam. Ross re enlisted with the United States Air Force on August 27, 1950 during the Korean Conflict. He was honorably discharged with the rank of Sergeant on August 26, 1951. Ross married his loving wife, B. Joan (Ward) Levan on April 22, 1950. After returning home from his time of service to his country, he was employed by the former PP&L and the Pennsylvania Railroad. For over 20 years, Ross was employed by the Bloomsburg Post Office as a postal clerk until his retirement in 1987. He was one of the first members of the National Fishing Lure Collectors Club where he also hosted two national conventions. Ross enjoyed spending his time with his family. He was an avid outdoorsman, sharing his love of fishing, a custom rod builder and also a master gardener sharing his crops with family, friends and neighbors. In addition to his parents, Ross was also preceded by his beloved wife, Joan, on January 16, 2018, and also by three sisters: Ruth, Grace and Charlotte. Survivors include his three sons: Timothy W. Levan and wife, Shirley, of McEwensville; Bradley S. Levan and wife, Karen, of Norristown; and Dennis R. Levan and wife, Jocelyn of Middleburg; and a daughter, Amy S. Keerans and husband, Scott, of West Chesterfield, VA; eight grandchildren and four great grandchildren, two step great grandchildren, and a special appreciation to his granddaughter, Jennifer Hipps, who was his rock and foundation throughout Ross's later life. Graveside services will be held on Saturday, June 1, 2019 at 10:00 am in New Rosemont Cemetery, Espy. A combined American Legion and VFW contingent will provide military honors. The Allen Funeral Home, Inc., 745 Market at Eighth Street in Bloomsburg is honored to be serving the Levan family. Memorial contributions in Ross's name are suggested to: Geisinger Home Health and Hospice, 410 Glenn Ave., Suite 200, Bloomsburg, PA 17815.

The family of Ross M. Levan created this Life Tributes page to make it easy to share your memories.

Send flowers to the Levan family.