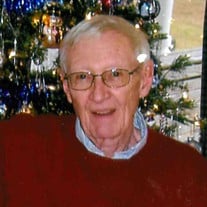 Ronald C. Linn, age 89 passed away peacefully in his sleep on Monday, February 7, 2022, under the care of hospice and surrounded by numerous loving caregivers. He was born on October 18, 1932, in Catawissa to the late Joseph H. and Edna E. (Brobst) Linn. Mr. Linn is survived by his loving wife of 63 years, Alice (Fegley) Linn. Ronald graduated from the former Catawissa High School where he was Captain of both the soccer and baseball teams. He then attended Lycoming College, where he majored in typewriter repair until 1952 when he joined the United States Air Force. Mr. Linn faithfully served his country during the Korean War and was a member of the Strategic Air Command. During his time in the service, he was stationed at the SAC Base located in Thule, Greenland. He was also stationed in the French Morocco and finally in Maine and was honorably discharged in 1956. After his military discharge, Ronald returned home to marry Alice and they spent the remaining 63 years together in Bloomsburg. He was employed as a Carpenter at Bloomsburg University for almost 30 years and retired in 1991. Ronald loved the outdoors and was an active fisherman. He was a member of the former St. Matthews Lutheran Church in Catawissa, the Catawissa American Legion, Post 541 and the Washington Lodge #265, F & A M. He was well respected and loved by those who knew him. In addition to his beloved wife, Alice, Ronald is survived by numerous nieces and nephews including Karen wife of Brian Parks and family, as well as his extended family Peggy LeVan, Bloomsburg, Pamela wife of Kevin Yost and their son, Emmitt Yost, Orangeville and Suzanne LeVan and her significant other Steven Stryker, Bloomsburg. He also spent many hours and long walks with his dear four-legged companions Pepe and Spruce. Ronald was the youngest son and last surviving member of his immediate family of eight children. He was preceded in death by brothers and sisters - Martha, Harold, James, Clifford, Francis, Lois and Donna Jean. He was also preceded in death by Larry LeVan, an extended family member and dear friend. Ronald possessed a caring, loving spirit and was concerned about everyone he met. He often asked, "are you ok?" to Alice and the individuals who cared for him on a daily basis. Girls, Alice appreciates all you have done to make Ronald's final days better. A time of visitation for family and friends will be held on Monday, February 14, 2022, from 3:00 pm to 5:00 pm at the Allen Funeral Home, Inc., 745 Market at Eighth Streets, Bloomsburg. Masonic Memorial Services will begin on Monday, February 14, 2022, at 5:00 pm. Private graveside committal services will be held at a later date in Hillside Cemetery, Catawissa with military honors presented by a combined VFW and American Legion Honor Guard. The Allen Funeral Home, Inc., Bloomsburg is honored to be serving the Linn family.

Ronald C. Linn, age 89 passed away peacefully in his sleep on Monday, February 7, 2022, under the care of hospice and surrounded by numerous loving caregivers. He was born on October 18, 1932, in Catawissa to the late Joseph... View Obituary & Service Information

The family of Ronald C. Linn created this Life Tributes page to make it easy to share your memories.

Ronald C. Linn, age 89 passed away peacefully in his sleep on...

Send flowers to the Linn family.