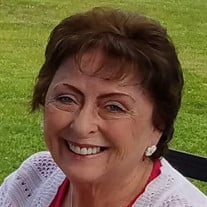 Roberta "Bobbie" Couch on December 10th, 2021 was given her wings and is now among the angels. She was 77 years old. Born in Cadillac, Michigan, on Friday, December 1, 1944 to the late Howard and Helen (Potrude) Hinkston. Bobbie was surrounded by love from the moment she came into this world. Love and compassion was the central theme of her life. She will be fondly remembered for the gentle way which she expressed her adoration towards her family and friends. She had a special heart that connected and found the good within every person she encountered. She was often found spending her time, side by side next to the love of her life; her husband. Her children within her blended family were her greatest joy and accomplishment. Her warmth and maternal nature carried on to her grandchildren and great grandchildren. She was also well known for her artistic and creative abilities. She transformed wedding venues, loved interior decorating, sewing, crafts and shopping. She will be remembered as one who brought happiness, comfort, and light into a world that often needed her effulgent spirit. Along with her parents, Bobbie was preceded in death by a brother H. Emery Hinkston, a sister Dorothy Barnum and a brother-in-law, Charles "Chuck" Barnum. Bobbie is survived by her husband of 46 years, Jack G. Couch; daughters Kimberly Todd of Bloomsburg, and her companion Joseph Opsitos, Shelly Storper of Bloomsburg and fiancée Ken Herritt, Laura Couch of Aarhus, Denmark; grandchildren Heather Todd of Orem, Utah; Kristin Farrell of Lehi, Utah and husband Joey; Joseph Todd of Philadelphia and wife, Kelsie; Matthew Storper of Harrisburg and wife Cynthia; Michael Storper of Harrisburg and wife, Kristie; Meleah Renner of Logan, Utah and husband Anthony. Her blended family included Steven Couch of Oregon City and wife Laurie; Christi Ziegler of Oregon City, Nanette Caruh, Linda Liebert, and Karen Peterson. Together from both marriages, they shared a total of 24 grandchildren and 11 great grandchildren. Surviving also is a brother, Harry Hinkston and his wife Ellen of Michigan and a sister-in-law, Kay Hinkston of Michigan. A time of visitation for family and friends will be held on Wednesday, December 15, 2021 from 4:00 pm to 6:00 pm at the Allen Funeral Home, Inc., 745 Market at Eighth Streets, Bloomsburg. Funeral services will begin on Wednesday, December 15, 2021 at 6:00 pm at the Allen Funeral Home, Inc. with Steven Couch, officiating. Graveside committal services will be held on Friday, December 17, 2021 at 2:00 pm in the Lightstreet Highland Cemetery, Bloomsburg. The Allen Funeral Home, Inc., is honored to be serving the Couch family.

Roberta "Bobbie" Couch on December 10th, 2021 was given her wings and is now among the angels. She was 77 years old. Born in Cadillac, Michigan, on Friday, December 1, 1944 to the late Howard and Helen (Potrude) Hinkston. Bobbie... View Obituary & Service Information

The family of Roberta "Bobbie" Couch created this Life Tributes page to make it easy to share your memories.

Send flowers to the Couch family.