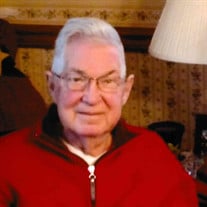 Robert D. Nichols, Sr., age 82, of Bloomsburg, passed peacefully surrounded by his wife and children, on Monday, July 3, 2017, a patient of the Geisinger Medical Center in Danville. Robert was a resident of his home in Bloomsburg for over 54 years. Robert was born on Wednesday, August 15, 1934 in Bloomsburg, a son of the late C. Earl and Maida (Ryan) Nichols. Throughout his younger years, Robert attended and later graduated from the Millville High School in 1953. On February 22, 1957, Robert married his loving wife, Gale Kindt of Bloomsburg. They celebrated a 60th wedding anniversary. For over 33 years, Robert was employed by the former TRW as a Machinist until his retirement in 1998. He was a member of the Ridge St. United Methodist Church, where he served several terms as a trustee. He was also a member of the former Moose Lodge #623 LOOM. His greatest joy in life was his family. Being a farmer at heart he enjoyed growing and sharing his garden produce. He also enjoyed spending his time hunting and fishing. In addition to his parents, Robert was also preceded by a twin brother, William Nichols. Survivors include his beloved wife of 60 years, Gale D. Nichols; children: Sherry L. Merrill (Ernest) of Bloomsburg, PA; Robert D. Nichols, Jr. (Jean Johnson) of Augusta, ME, Terry J. Nichols of Bloomsburg, Danny B. Nichols (Beth) of Bellflower, CA; grandchildren: Kevin Kremer, Kristopher Kremer, Bobbi Jo Mooers, Allyson Fyffe, Travis Nichols, Devan Nichols, Kirsti Nichols, and Kelsi Nichols; 15 great grandchildren, 5 siblings: Donald Nichols, Richard Nichols, Faye Kline (Donald), John Nichols (Donna), and David Nichols. A time of Visitation for family and friends will be held on Thursday, July 6, 2017 from 9:00 am to 10:00 am at the Ridge St. United Methodist Church, 145 Ridge St., Bloomsburg. Funeral Services will continue at 10:00 am at the Ridge St. United Methodist Church with, his pastor, Virginia Bailey, officiating. Graveside committal services will immediately follow in the Elan Memorial Park. The Allen Funeral Home, Inc., 745 Market at Eighth Street is honored to be serving the Nichols family. Memorial contributions in Robert's name are suggested to: Ridge Street United Methodist Church, 145 Ridge St., Bloomsburg, PA 17815. Friends and family wishing to send a memorial gift, share a personal memory or offer condolences to the family, a Memorial Tribute Page in Robert’s honor and a Sympathy Store are available at www.Allen FuneralHome.com.

Robert D. Nichols, Sr., age 82, of Bloomsburg, passed peacefully surrounded by his wife and children, on Monday, July 3, 2017, a patient of the Geisinger Medical Center in Danville. Robert was a resident of his home in Bloomsburg for over... View Obituary & Service Information

The family of Robert D. Nichols Sr. created this Life Tributes page to make it easy to share your memories.

Send flowers to the Nichols family.