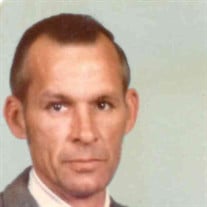 Robert H. Folk, Sr. age 85, of Bloomsburg, passed away on Sunday, August 18, 2019, at his Scott Twp. residence. Robert was a resident of his home in Bloomsburg for over 58 years. He was born on Wednesday, October 4, 1933 in Berwick, a son of the late Leroy and Josephine (Horrax) Folk. Bob faithfully served his country in the U.S. Marine Corps from June 1953 until he was honorably discharged in June, 1956. On November 16, 1957, Bob married his loving wife, the former Shirley A. German. For most of his working career, he was employed as a Textile Plant Manager for many different companies until his retirement in 1992. He attended Shiloh Bible Church, Bloomsburg and was a lifetime member of the Espy Fire Company. Bob enjoyed wildlife and spending his time fishing and hunting. He loved to spend time with his family, especially his granddaughter, Charyl. In addition to his parents, Bob was also preceded by two sisters, Evelyn Lamon, and Helen Force, also by four brothers, Roland "Sam" Folk, Eugene Folk, his twin, Richard Folk, and Donald Folk. Survivors include his beloved wife of 61 years, Shirley A. Folk at home, a son, Robert H. Folk, Jr. and his wife Cassandra of Newport, PA, a granddaughter, Charyl E. wife of Eric Bibeault of North Smithfield, RI, a grandson, Zachary Hoffman of Pullman, WA, a brother, Edward Folk and his wife Margaret of Bloomsburg, a sister, Martha wife of Henry Knorowski of Berwick, and a sister in law, Donna Folk of Berwick. A time of Visitation for family and friends will be held on Saturday, August 24, 2019 from 9:00 am to 10:00 am at the Allen Funeral Home, Inc., 745 Market at Eighth Streets, Bloomsburg. Funeral Services will begin on Saturday, August 24, 2019 at 10:00 am at the Allen Funeral Home, Inc. with Rev. Dr. Douglas H. Lyon, officiating. Graveside committal services will immediately follow in the New Rosemont Cemetery, Espy. Military honors will be provided by a combined American Legion and V.F.W. contingent. The Allen Funeral Home, Inc., is honored to be serving the Folk family. Memorial contributions in Robert's name are suggested to: Geisinger Hospice 410 Glenn Ave., Suite 200, Bloomsburg, PA 17815. Friends and family wishing to send a memorial gift, share a personal memory or offer condolences to the family, a Memorial Tribute Page in Robert’s honor and a Sympathy Store are available at www.Allen FuneralHome.com.

Robert H. Folk, Sr. age 85, of Bloomsburg, passed away on Sunday, August 18, 2019, at his Scott Twp. residence. Robert was a resident of his home in Bloomsburg for over 58 years. He was born on Wednesday, October 4, 1933 in Berwick,... View Obituary & Service Information

The family of Robert H. Folk Sr. created this Life Tributes page to make it easy to share your memories.

Send flowers to the Folk family.