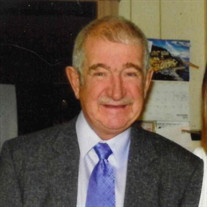 Robert “Bobby” Gary Brooking, 79, passed away on Tuesday, February, 16, 2021 under the expert and compassionate care of the Angels on Earth at Highlands Healthcare in Laporte. Bobby was born in the Bloomsburg Hospital on March 23, 1941, the third child of the late John Jr. and Lucille (Millard) Brooking. Bobby was well known in the Bloomsburg area, having once been dubbed “Bloomsburg’s Number One Fan” by the Bloomsburg High School Yearbook. He loved attending sporting events at both the Bloomsburg High and BU levels, as well as the various sports games of his family members. For many years Bobby’s favorite mode of transportation was his bicycle and he was often seen biking to carnivals, street fairs, and just about any social gathering. He rode his bike to the Bloomsburg Swimming Pool every day, beginning the day the pool opened in 1955. Many years later, when his advancing age no longer allowed him to pedal to the pool, he either walked or was transported by one of his siblings or friends. He attended and graduated from the Fernville Special Education School during the 1950’s and 60’s. While there he made many friends, most notably beloved school nurse, Joan Kile, who he honestly adored. And speaking of honesty, Bobby was just not capable of telling a lie or gossiping against someone. His nature was to accept everyone he met with true Christian open and honest heartfelt love and a big smile. Those who had the good fortune of being born on March 23 would forever become Bobby’s “birthday girl or boy.” There was never a lack of conversation on his part and he wanted to know all about you. “You married?” “Kids?’’ “Where do you work?” “What school do you go to?” And most of all “How old are you?” If you were younger than him he said, “I got you beat!” After the inquisition you would become his friend forever. Bobby attended the Nazarene Church on Seventh Street in Bloomsburg regularly and was very upset when it closed. Eventually he found a new church family at the Trinity United Church of Christ and was ecstatic when that congregation purchased and moved into the former Nazarene Church building on Seventh Street. His favorite hymns were "How Great Thou Art" and "Jesus Loves Me". He had complete faith in God. When he learned of a death or other unfortunate circumstance to someone he knew he would point skyward and say, “I can’t help it He’s the boss!” He thoroughly enjoyed his mother’s and his brother Rick’s cooking. Among Bobby’s favorite foods were Lebanon bologna sandwiches with ketchup, or his own specialty, “burned” hot dogs. Add some honey bar-b-que chips and top it off with chocolate cake with peanut butter icing and he was a happy guy! He loved the Phillies and was blessed with good friends and family who took him to many games over the years. Bobby was predeceased by his mother in 2005 and father in 2008, and his two older brothers, John III in 1951 and Carl in 1998. He is survived by two “little brothers”, William, Plainfield Vt and Richard, Bloomsburg and eight sisters: Margaret “Peggy” Keefer, Atlas; Donna Lemon and husband Terry, Bloomsburg; Joanne Brooking, Plainfield VT; Nancy Maynard, Raymond ME; Bertelle Brooking and partner Marshall Raisman, Micco FL; Dorothy Brooking and wife Susan Horn, Daytona Beach FL; Alice Derr and husband Ronald, Bloomsburg; and Myreta Churba and husband Richard, South Williamsport. Also surviving are his beloved sister in law, Luanne Brooking, Massena NY, and so many nieces, nephews and friends to mention individually. The Brooking family wishes to extend heartfelt thanks to the many wonderful people who enriched Bobby’s life with their presence and caring. It truly does take a village. To say Bobby will be missed is an understatement. We take comfort in knowing that God has opened his arms and welcomed him home. Matthew 18 verses 3 & 4: “Verily I say unto you, except ye be converted, and become as little children, ye shall not enter into the kingdom of heaven. Whosoever therefore shall humble himself as this little child, the same is greatest in the kingdom of heaven.” Seems to fit Bobby to a tee. Amen. Graveside funeral services will begin on Wednesday, February 24, 2021 at 10:00 am at Elan Memorial Park, Lime Ridge with Rev. Dr. Lee Barnhardt, officiating. The Allen Funeral Home, Inc., 745 Market at Eighth Streets, Bloomsburg is honored to be serving the Brooking family. Memorial contributions in Bobby's name are suggested to: Bloomsburg Town Pool Renovation Project, P.O. Box 9021 Bloomsburg, PA 17815 or to any other charity of your choice, especially those that benefit children.

Robert &#8220;Bobby&#8221; Gary Brooking, 79, passed away on Tuesday, February, 16, 2021 under the expert and compassionate care of the Angels on Earth at Highlands Healthcare in Laporte. Bobby was born in the Bloomsburg Hospital on... View Obituary & Service Information

The family of Robert "Bobby" Gary Brooking created this Life Tributes page to make it easy to share your memories.

Send flowers to the Brooking family.