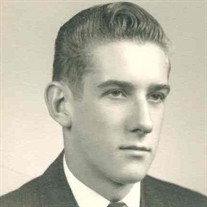 Robert J. Beagle, age 75, of Bloomsburg, died on Monday, October 2, 2017, a resident of the The Gardens at Orangeville. Robert was a resident of Bloomsburg his entire life. Robert was born on Friday, November 14, 1941 in Bloomsburg, a son of the late Jack and Getha (Laubach) Beagle. Throughout his younger years, Robert attended the Bloomsburg area schools, and later graduated from the Bloomsburg High School in 1959. He was a member of the Bloomsburg American Legion #273. Robert enjoyed spending his time fishing, hunting and also watching NASCAR. In addition to his parents, Robert was also preceded by a daughter: Kim M. Haladay and a brother: Jim F. Beagle. Survivors include his sister: Pat A. Eyer and husband, (David "Satch") of Bloomsburg, three grandchildren and three nieces. Funeral Services will begin on Friday, October 6, 2017 at 11:00 am. in the New Rosemont Cemetery with Rev. Scott Lyons, officiating. The Allen Funeral Home, Inc., is honored to be serving the Beagle family. Memorial contributions in Robert's name are suggested to: Animal Resource Center c/o Linda Bird 301A Boone Road Bloomsburg, PA 17815 or, Geisinger Hospice 410 Glenn Ave., Suite 200 Bloomsburg, PA 17815. Friends and family wishing to send a memorial gift, share a personal memory or offer condolences to the family, a Memorial Tribute Page in Robert’s honor and a Sympathy Store are available at www.Allen FuneralHome.com.

The family of Robert J. Beagle created this Life Tributes page to make it easy to share your memories.

Send flowers to the Beagle family.