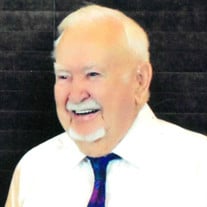 Robert Manning Amick, Sr. age 90, of Millertown Road, Bloomsburg died peacefully at his home on Tuesday, August 24, 2021, under the care of Berwick Hospice and wonderful caregivers and family who walked with him on the last leg of his journey. Born in Hardwick, VT, on January 25, 1931, he was a son of the late Harold H. and Bernice M. (Chaffee) Amick. He was a graduate of Howard High School and then served his country with honor as a member of the U.S. Navy from 1949 1953 during the Korean War. Bob was employed for many years as Operations Manager for Interstate Travelers Service until he retired in 1992. He won many awards in his profession. He enjoyed selling cars, golfing, hunting, fishing and gardening. He was a lifetime member of Veterans of Foreign Wars. He loved spending time with his family, especially his grandchildren and great grandchildren. He was preceded in death by his parents, two sons, Robert Wayne Amick and Michael Alan Amick, a daughter, Teresa Lynn Frey, a grandson, Cody Manning Amick, three great grandchildren, Amber Skye Amick, Charles Luke Amick and Piper Lynn Lukonen, a brother, Harold Amick, Jr., and two sisters, Beverly Bathgate and Doris Holter. Bob is survived by his wife, the former Sarah E. "Sally" Keith, with whom he observed his 66th wedding anniversary in March, 2021; four children: Roberta Birt, and her husband John, Bloomsburg; Robert Amick Jr., and his wife Mary, Bloomsburg; Deborah Hartman, and her husband John, Orangeville; Naomi Kontz, and her husband Joe, Holland, PA; a daughter in law, Joyce Amick, Bloomsburg; a son in law, Dean Frey, Bloomsburg; 27 grandchildren and 51 great grandchildren; and a sister Betty Motter of Lock Haven. A time of visitation for family and friends will be held on Saturday, August 28, from 10:00 to 11:00 a.m. at the Bloomsburg Christian Church, 107 Duessen Drive, Bloomsburg. A Celebration of Life Service will begin on Saturday, August 28, at 11:00 a.m. at the Bloomsburg Christian Church, 107 Duessen Drive, Bloomsburg, with his Pastor Peter Albrecht of Open Door Christian Fellowship, officiating. The Allen Funeral Home, Inc., 745 Market at Eighth Streets, Bloomsburg is honored to be serving the Amick family. Memorial contributions in Robert's name are suggested to: The combined VFW and American Legion Honor Guard, 259 Legion Road, Millville, PA 17846.

Robert Manning Amick, Sr. age 90, of Millertown Road, Bloomsburg died peacefully at his home on Tuesday, August 24, 2021, under the care of Berwick Hospice and wonderful caregivers and family who walked with him on the last leg of his... View Obituary & Service Information

The family of Robert Manning Amick Sr. created this Life Tributes page to make it easy to share your memories.

Send flowers to the Amick family.