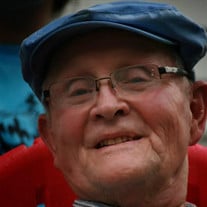 Richard K. "Dick" Hall, age 84, of Bloomsburg, passed away on Sunday, March 24, 2019, at Geisinger Medical Center in Danville, after a short illness. Richard was a resident of Bloomsburg all of his life. He was born on Friday, February 22, 1935 in Catawissa, a son of the late Joseph L. and Marion (Golder) Hall. He graduated from the former Scott High School in 1953. In his youth, he worked at the family business, The Village Inn Skating Rink, Espy. He faithfully served his country on active duty in the U.S. Army in 1955, later serving as a Sergeant with the U.S. Army National Guard, earning the Gen. Thomas J. Stewart Medal, and honorably discharged in 1960. On January 26, 1963, Richard married his loving wife, the former Saundra K. Yeisley. He apprenticed in the building/masonry trades with James Reynolds and Art Hunsinger. He was a self employed general contractor, building spec. and custom homes in the area between 1955-1978. For over 20 years, he was employed by Geisinger Medical Center as a Carpenter in Plant Engineering until his retirement in 1999. During his career there, he was well known for his service to the Children's Miracle Network Telethon, donating over $12,000. He designed and built handcrafted furniture pieces (jewelry armoires, grandfather clocks, etc.) and sold raffle tickets at all the Geisinger facilities. In his spare time, Dick especially enjoyed spending time with his family. He loved to play and invent card and board games, and was very competitive. He enjoyed all outdoor activities, including camping, boating, hunting, fishing and traveling. Dick loved to work with his hands, his work was his hobby. He "moonlighted" throughout his 70's leaving many "landmarks" additions, garages, fireplaces and remodeling. Richard was a member of the St. Columba Catholic Church, Bloomsburg, and was often Father Casey's "handyman" for facilities and school/church functions. In addition to his parents, Richard was also preceded by five siblings, Maude (Hall) Adams, John, Joseph, William Hall, and Warren C. Mastellar. Survivors include his beloved wife of 56 years, Saundra K. Hall, two children, Risha K. Johnson of Port Allegany, PA, and Ryan K. Hall of Bloomsburg, a daughter in law Suzanne K. Hall of Bloomsburg, five grandchildren, Adam R. Johnson, McKenna L. Johnson, Kaitlan M. Anderson, Rylie K. Hall, Kagan R. Hall, and many dearly loved nieces, nephews and cousins. A memorial gathering of friends and family will be held on Saturday, May 4, 2019 at 1:00 PM at Dick and Sandy's home. Dick will be privately interred in The New Rosemont Cemetery, Espy. The Allen Funeral Home, Inc., is honored to be serving the Hall family. Memorial contributions in Richard's name may be made to: Geisinger Medical Center Children's Miracle Network, 100 Academy Ave., Danville, PA 17822. Friends and family wishing to send a memorial gift, share a personal memory or offer condolences to the family, a Memorial Tribute Page in Richard’s honor and a Sympathy Store are available at www.Allen FuneralHome.com.

Richard K. "Dick" Hall, age 84, of Bloomsburg, passed away on Sunday, March 24, 2019, at Geisinger Medical Center in Danville, after a short illness. Richard was a resident of Bloomsburg all of his life. He was born on Friday, February 22,... View Obituary & Service Information

The family of Richard K. "Dick" Hall created this Life Tributes page to make it easy to share your memories.

Send flowers to the Hall family.