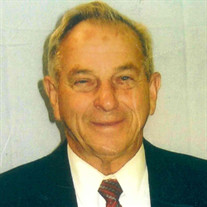 Richard A. Coxe Jr., age 89, of Bloomsburg, died on Monday, January 30, 2017, at his home in Almedia. Richard was a resident of his home in Scott Township for over 59 years. Richard was born on Sunday, November 27, 1927 in Bloomsburg, a son of the late Richard A., Sr. and Carolla (Watts) Coxe. Throughout his younger years, Richard attended the Bloomsburg area schools, and later graduated from the Bloomsburg HIgh School in 1945. Following graduation, he faithfully served his country in the US Navy during World War II. Richard was a Brick Layer Foreman and was employed most of his working life by the Brick Layer's Union Local #5. On June 3, 1950, Richard married his loving wife, Maxine A. (Fetterolf) Coxe who died March 16, 2015. As a member of Ridge St. United Methodist Church, he was active in the Adult Sunday School Class, served on numerous committees over many years and was active serving at church dinners. He was also a member of the Bloomsburg Elks Lodge #436 B.P.O.E., Washington Lodge #265 F&AM, Caldwell Consistory, and the National Rifle Association. Richard enjoyed spending his time with his family and was "Uncle Dick" to everyone. He also enjoyed hunting & fishing. In addition to his wife and parents, Richard was preceded by his brother, Paul R. Coxe. Survivors include numerous nieces and nephews. A time of Visitation for family and friends will be held on Thursday, February 2, 2017 from 5:00 pm to 7:00 pm at the Allen Funeral Home, Inc., 745 Market at Eighth St., Bloomsburg. Washington Lodge #265 will conduct a Masonic Service Thursday at 6 pm. Funeral Services will begin on Friday, February 3, 2017 at 10:00 am at the Ridge St. United Methodist Church with his pastor, Virginia Bailey, officiating. Graveside committal services will immediately follow in the Elan Memorial Park, where a combined veterans group will present military honors. The Allen Funeral Home, Inc. is honored to be serving the Coxe family.

Richard A. Coxe Jr., age 89, of Bloomsburg, died on Monday, January 30, 2017, at his home in Almedia. Richard was a resident of his home in Scott Township for over 59 years. Richard was born on Sunday, November 27, 1927 in Bloomsburg, a son... View Obituary & Service Information

The family of Richard A. Coxe, Jr. created this Life Tributes page to make it easy to share your memories.

Send flowers to the Coxe, family.