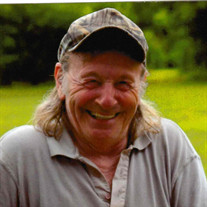 Richard W. Barnes, Sr., age 71, of Bloomsburg, died on Thursday, January 18, 2018, a patient of the Geisinger Medical Center. Dick was born on Sunday, September 22, 1946 in Bloomsburg, a son of the late Charles W. and Winifred (Snyder) Barnes. He graduated from the Bloomsburg High School in 1965. Following graduation, Richard faithfully served his country during the Vietnam War. He was honorably discharged December 2, 1968 For over 28 years, Dick was employed by Fabri Kal Corp. as a Maintenance Mechanic until his retirement in 2010. He was a member of the Bloomsburg American Legion #273. Dick enjoyed "pickin' and grinnin' ", spending his time outdoors and gardening. In addition to his parents, Dick was also preceded by brother, Charles Barnes, Jr.. Survivors include his wife: Joanne Hudock; three sons:, Richard W. Barnes, Jr., Mike Barnes and wife, Christie, and Keith Barnes and wife, Erica, all of Bloomsburg, 13 grandchildren and 3 great grandchildren; two sisters: Margaret Haladay of Danville and Shirley Sacavage and husband, John, of Rohrsburg, PA. A time of Visitation for family and friends will be held on Thursday, January 25, 2018 from 6:00 pm to 8:00 pm at the Allen Funeral Home, Inc., 745 Market at Eighth St.,Bloomsburg. The Allen Funeral Home, Inc., is honored to be serving the Barnes family. Friends and family wishing to send a memorial gift, share a personal memory or offer condolences to the family, a Memorial Tribute Page in Richard’s honor and a Sympathy Store are available at www.Allen FuneralHome.com.

The family of Richard W. Barnes Sr. created this Life Tributes page to make it easy to share your memories.

Send flowers to the Barnes family.