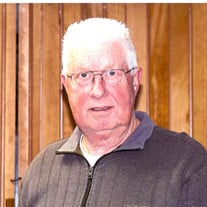 Reginald A. "Reg" Wright, age 76, of Bloomsburg, died on Sunday, November 26, 2017, a patient of The Gardens at Orangeville. Reg was a resident of his home in Bloomsburg for over 45 years. Reg was born on Monday, February 10, 1941 in Berwick, a son of the late Robert John Wright and Gertrude (Robinholt) Wright Neagley. Throughout his younger years, Reg attended the Berwick area schools, and later graduated from the Berwick High School in 1959. He served in the US Army during the Vietnam War. Reg worked for PP & L for over 35 years until his retirement in 2001. In 1966, Reg married his loving wife the former, Karla S. Gearhart. Reg was a member of the Wesley United Methodist Church, he was also a member of the Fishingcreek Sportsman Association, Orangeville Sportsmans Club, Bloomsburg American Legion #273 and Trout Unlimited. Reg enjoyed the outdoors, loved to fish, hunt, shoot trap and spending time at his cabin on Kettle Creek. Survivors include his beloved wife of 51 years, Karla S. Wright, three sons, Robert J. Wright II and wife Jennifer of New Cumberland; Darrin T. Wright and wife Lauren of State College; Chad M. Wright and wife Kathy of Folsom, CA; 9 grandchildren and 4 step grandchildren. A private memorial service will be held at a later date at the convenience of the family. The Allen Funeral Home, Inc., is honored to be serving the Wright family. Memorial contributions in Reg's name are suggested to: Fishingcreek Sportmans Association, P.O. Box 331, Benton, PA 17814. Friends and family wishing to send a memorial gift, share a personal memory or offer condolences to the family, a Memorial Tribute Page in Reginald’s honor and a Sympathy Store are available at www.Allen FuneralHome.com.

Reginald A. "Reg" Wright, age 76, of Bloomsburg, died on Sunday, November 26, 2017, a patient of The Gardens at Orangeville. Reg was a resident of his home in Bloomsburg for over 45 years. Reg was born on Monday, February 10, 1941 in Berwick,... View Obituary & Service Information

The family of Reginald A. "Reg" Wright created this Life Tributes page to make it easy to share your memories.

Send flowers to the Wright family.