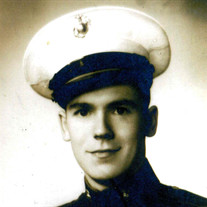 Ray T. Hock Sr., age 94, of Bloomsburg, passed away on Thursday, September 19, 2019, at his Scott Twp. home surrounded by his loving family. Ray was a resident of his home in Scott Twp. for over 66 years. He was born on Saturday, March 28, 1925 in Mt. Pleasant Twp., a son of the late George M. and Maria (Thomas) Hock. Throughout his younger years, Ray attended the Bloomsburg area schools, and later graduated from the Bloomsburg High School in 1943. Ray faithfully served his country in the U.S. Marine Corps. during WW II and was honorably discharged in November, 1946. On June 12, 1946, Ray married his loving wife, the former Audrey Jane Honse who preceded him in death on January 18, 2008. Ray and his wife took charge of the Columbia County Institutional Home and Farm from 1946 1953. He operated Hock's Dairy from 1953 1972 and Hock's Oil Service from 1955 1989. He also owned and operated Hidden Heights Mobile Home Park for 21 years from 1970 1991. Ray was a Scott Township Supervisor for 21 years and served on the Scott Township Park Commission for several years. Ray was a member of the St. Luke Lutheran Church, Lightstreet where he served on the Church Council and was on the building committee for the present church building. He was a member of Oriental Lodge #460, Orangeville, Caldwell Consistory, a life member of the Bloomsburg Elks Lodge #436, Valley of Bloomsburg American Legion Post #273. He was also a life member of Liberty Fire Co., Bloomsburg and a life member of Lightstreet Fire Company, the Bloomsburg Fireman's Relief Association, and The Bloomsburg Fair Association. Ray loved working outside in his gardens, spending time with his family as well as hunting and football. In addition to his parents, and wife, Ray was also preceded in death by two sisters, Leona Yohey, and Marquerite Schultz, and four brothers, Eugene Hock, Horace Hock, Larue Hock, and Harry Hock. Ray will be greatly missed by his loving family, survivors include his two sons, Ray T. Hock, Jr. and wife Lori of Bloomsburg, Dana G. Hock and wife Nancy of Bloomsburg, six granddaughters, Kimberly wife of Scott Smith, Rachel wife of Mark Moskovich, Natalie wife of John Buchhalter, Megan wife of Paul McCue, Melissa wife of Eric Benscoter, Mallory wife of Bryce Snyder, 15 great grandchildren, who were especially loved by their Opa, a brother, Clair C. Hock and wife Doris of Bloomsburg, and many nieces and nephews. The family would like to especially thank his caregiver Mary Davenport as well as the wonderful Geisinger Hospice caregivers. A time of Visitation for family and friends will be held on Wednesday, September 25, 2019 from 9:00 am to 10:00 am at the St. Luke Lutheran Church, 9 St. Luke Way, Bloomsburg. Funeral Services will begin on Wednesday, September 25, 2019 at 10:00 am at St. Luke Lutheran Church with Rev. Dr. Kerry P. Maurer, officiating. Graveside committal services will immediately follow in the Elan Memorial Park, Lime Ridge with military honors being provided by a combined V.F.W. and American Legion groups. The Allen Funeral Home, Inc., 745 Market at Eighth Streets, Bloomsburg is honored to be serving the Hock family. Memorial contributions in Ray's name are suggested to: St. Luke Lutheran Church, 9 St. Luke Way, Bloomsburg, PA 17815 or Geisinger Hospice, 410 Glenn Ave., Suite 200, Bloomsburg, PA 17815. Friends and family wishing to send a memorial gift, share a personal memory or offer condolences to the family, a Memorial Tribute Page in Ray’s honor and a Sympathy Store are available at www.Allen FuneralHome.com.

Ray T. Hock Sr., age 94, of Bloomsburg, passed away on Thursday, September 19, 2019, at his Scott Twp. home surrounded by his loving family. Ray was a resident of his home in Scott Twp. for over 66 years. He was born on Saturday, March 28,... View Obituary & Service Information

The family of Ray T. Hock Sr. created this Life Tributes page to make it easy to share your memories.

Send flowers to the Hock family.