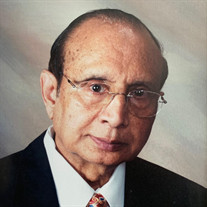 Dr. Raj P. Chopra passed away at the age of 86 on Sunday, August 18th at Geisinger Medical Center in Danville, PA. He was born on August 29th, 1932 in Ludhiana, India. His love of learning led him down the path of medicine. He graduated from Grant Medical College in Bombay, India in 1957. He married his wife Rani in 1960 and they moved to the United States in 1963. Dr. Chopra began his residency in Urology in Kingston, PA and was hired as a partner shortly after. In 1967, he established his own practice. However, he never forgot his roots and would often send medical supplies, equipment and medicines to his home town in India. Over the past 50 years, Dr. Chopra built a patient base of over 10,000, seeing patients up until last year. He was beloved and respected by both his community of patients and peers. In addition to being certified by the American Board of Urologic Surgeons, he was a Fellow of the American College of Surgeons, Fellow of the International College of Surgeons and a member of the American Urologic Association. Medicine was his biggest passion. Not a day went by that he didn’t share a story about one of his patients. He considered being a doctor to be of the greatest privileges of his life. Besides practicing medicine, he loved taking trips with his family. From China to Jamaica to Machu Picchu, Dr. Chopra traveled the globe. He loved to spend time with his family. Whether playing card games, teaching his grandkids about medicine, or going out to eat at his favorite restaurant Ghezzi’s, nothing made him happier than when his family was together. In addition to his loving wife Rani, he is survived by his three sons, whom he was immensely proud of Bipin, Atul and Anuj; three daughters in law, whom he adored Zulma, Namita and Ayesha; five grandchildren, who were his pride and joy Revant, Aarushi, Avani, Aanya and Aaryan; younger brother, Hari Krishan Chopra, sister in law Priya Chopra and their family; and his three younger sisters. Family, friends, and any who wish to honor Dr. Chopra are invited to attend a celebration of his life on Wednesday, August 21st from 4:00 pm to 6:00 pm at Allen Funeral Home, Inc. at 745 Market at Eighth St Bloomsburg PA. Friends and family wishing to send a memorial gift, share a personal memory or offer condolences to the family, a Memorial Tribute Page in Dr. Chopra's honor and a Sympathy Store are available at www.Allen FuneralHome.com

Dr. Raj P. Chopra passed away at the age of 86 on Sunday, August 18th at Geisinger Medical Center in Danville, PA. He was born on August 29th, 1932 in Ludhiana, India. His love of learning led him down the path of medicine. He graduated... View Obituary & Service Information

The family of Dr. Raj P. Chopra MD created this Life Tributes page to make it easy to share your memories.

Send flowers to the Chopra family.