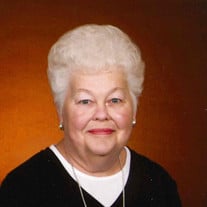 Pauline Ruth Krum, age 84, of Bloomsburg, passed away on Thursday, May 31, 2018, at Bloomsburg Care and Rehabilitation Center in Bloomsburg. Pauline was a resident of her home on Leonard St. in Bloomsburg for over 50 years. She was born on Friday, March 23, 1934 in Bloomsburg, a daughter of the late Clinton C. and Irene (Spaid) Hummel. Throughout her younger years, Pauline attended the Bloomsburg area schools, and later graduated from the Bloomsburg High School, with honors in 1952. On August 15, 1953, Pauline married her loving husband, John J. Krum who preceded her in death on September 21, 2012. They had celebrated their 59th wedding anniversary shortly before his death. While her husband John served in the Army, she worked at John H. Shuman Insurance Agency. When John and his brother Paul finished serving their country in the Korean War they formed Krum's Home Beautifiers where she was Secretary and Store Attendee, until their retirement. She and John enjoyed many family and friend outings, going to the casinos, traveling and taking bus trips. They were well known for decorating their home for all the different holidays. Her pastime was spent going out to eat with family and friends, watching game shows on TV, doing word search puzzles and playing cards. Pauline was an active member of St. Matthew Lutheran Church, Bloomsburg since 1953 and was involved in many church functions. For many years she was the coordinator of The Meals On Wheels program for the church. She was also a member of the American Legion Auxiliary Post #273 and Geisinger Bloomsburg Hospital Auxiliary. Pauline was a Philadelphia Phillies fan for all of her life and attended many games. She watched NASCAR races as long as Jeff Gordon was racing. Survivors include her beloved family; a daughter, Denise wife of Timothy Van Epps; a son, Dennis Krum and wife Tracy all of Bloomsburg; four grandchildren, Amanda wife of Peter Fleischer of King of Prussia; Alyse wife of Joseph McDowell of Carlisle; Jacob Krum of Columbus, OH; Zachary Krum of Pittsburgh; four great grandchildren, Anna Fleischer, Eva Fleischer, Cora McDowell, Van McDowell; a brother, Cleveland C. Hummel and wife Rose of Bloomsburg; a sister, Gloria wife of Dick Gearheart of Catawissa; along with several nieces and nephews. A time of Visitation for family and friends will be held on Monday, June 4, 2018 from 10:00 am to 11:00 am at St. Matthew Lutheran Church, 123 Market Street, Bloomsburg. Funeral Services will begin on Monday, June 4, 2018 at 11:00 am at St. Matthew Lutheran Church with her pastor, Rev. Dr. Joel L. Zeiders, and her nephew Rev. Steven C. Hummel, pastor of Trinity Reformed United Church of Christ, Bloomsburg officiating. Graveside committal services will immediately follow in the New Rosemont Cemetery, Espy. The Allen Funeral Home, Inc., 745 Market at Eighth Streets, Bloomsburg is honored to be serving the Krum family. Pauline wanted to thank her family, friends and neighbors for all the kindness given to her during this difficult time. A very special thank you to Pastor Joel Zeiders for all his visits, they meant so much. Memorial contributions in Pauline's name are suggested to: St. Matthew Lutheran Church Memorial Fund, 123 Market St., Bloomsburg, PA 17815. Friends and family wishing to send a memorial gift, share a personal memory or offer condolences to the family, a Memorial Tribute Page in Pauline’s honor and a Sympathy Store are available at www.Allen FuneralHome.com.

Pauline Ruth Krum, age 84, of Bloomsburg, passed away on Thursday, May 31, 2018, at Bloomsburg Care and Rehabilitation Center in Bloomsburg. Pauline was a resident of her home on Leonard St. in Bloomsburg for over 50 years. She was born on... View Obituary & Service Information

The family of Pauline Ruth Krum created this Life Tributes page to make it easy to share your memories.

Pauline Ruth Krum, age 84, of Bloomsburg, passed away on Thursday,...

Send flowers to the Krum family.