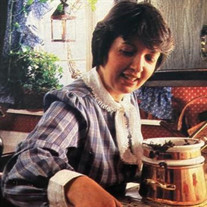 Paulette Irene Rishel, 76, of Northumberland, Pa., passed away peacefully in her home to be with her Heavenly Father on Sunday, May 16, 2021. She was born March 5, 1945, in Danville, Pa., the daughter of the late Parvin William and Pauline Corabelle (West) Cashner. She was preceded in death by her three brothers, William “Bill” Edward Cashner, Parvin "Buzz" Eugene Cashner, and Gerald "Jerry" Wayne Cashner. Paulette is survived by her husband, Harry William Rishel Jr., their four children: Ember Sue Markunas of Selinsgrove, Harry William Rishel III of Danville, Amy Sue Clark of Bloomsburg, Jeremy Parvin Rishel of Richland, Wa., eight grandchildren, and many nieces and nephews-all whom she loved so dearly. Paulette and Harry were married on December 6, 1967. Together, they painstakingly converted a tiny summer home along rural Rt. 11 into their primary residence, where they lovingly raised their family and started their own successful businesses. Paulette was a self-taught, hobbyist-turned-master candy-maker that developed her talents to start a family business called “The Candy Cottage”, which was featured in the “Better Homes and Gardens” December 1984, 1986, and 1987 Christmas magazine issues. In response to growing demand, Paulette and Harry proceeded to build a quaint log cabin “cottage” near their residence in 1987, which became the official home of “The Candy Cottage” for the next 20 years. From there, Paulette hand-crafted and perfected the recipes of her finest confections, including molded chocolates, butter creams, truffles, fudge, brittle, and toffee. Her candy was enjoyed locally and nationally, and it even made its way into the White House. Early on in her endeavor, Paulette said “I could keep busy for a lifetime just making things for others to enjoy” to which it now can be said she faithfully fulfilled. Upon retiring from her candy business, Paulette continued to pursue her many life-long interests; she could be found tending to her many flower gardens, cooking and baking, collecting antiques and dinnerware, crafting, sewing, quilting, and most importantly enjoying the company of her grandchildren. She poured love into all those who knew her and lived a life full of purpose, enjoyment, and contentment. Private services will be held to honor Paulette's life. Memorial contributions in Paulette's name are suggested to: The Danville SPCA, 1467 Bloom Rd, Danville, PA 17821 in memory of her and her beloved dogs “Daisy” and “Lady”. The Allen Funeral Home, Inc., 745 Market at Eighth Streets, Bloomsburg is honored to be serving the Rishel family.

Paulette Irene Rishel, 76, of Northumberland, Pa., passed away peacefully in her home to be with her Heavenly Father on Sunday, May 16, 2021. She was born March 5, 1945, in Danville, Pa., the daughter of the late Parvin William... View Obituary & Service Information

The family of Paulette Irene Rishel created this Life Tributes page to make it easy to share your memories.

Send flowers to the Rishel family.